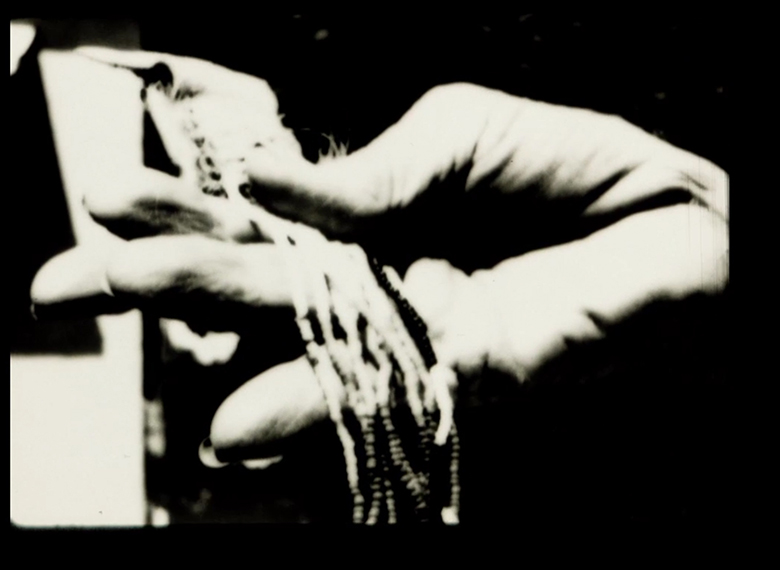 This is Lindsay McIntyre’s response to the “death” of the medium in the digital age. Hailing from Edmonton, McIntyre has been selected as the Visiting Artist for the 24th annual $100 Film Festival in Calgary, February 25–27th, where her films How to Make a Phantastik Film (2003), Bernard Gaspé (2013), and In the Backyarden (2015) will be featured as a retrospective. The festival, exclusively showcasing small-format, celluloid-based films, is an ideal venue for her short, experimental works, which are primarily shot on 16-mm, often in a documentary style, and crafted using handmade techniques and materials. She calls her filmmaking process “mostly self sufficient,” doing everything from “making the emulsion and coating the film to operating the camera, editing and sound,” as well as mixing and layering images and audio on film in live projection performances. Her work is a dynamic symbiosis between medium, maker, and subject in which the craft and construction of experimental celluloid filmmaking serve as a means of both articulation and experience.

McIntyre’s work, distinctly concerned with medium, uses film as both an evocative vehicle for exploring themes in her works, and as the theme itself. Her one-minute-long 1950s-style parody How to Make a Phantastik Film (2003), Jury Favourite and Audience Favourite at the $100 Film Festival in 2004, playfully tackles this. Narrated by a voice explaining to a housewife “how to make an experimental film” using a household cleaning product, the film pokes fun at experimental filmmakers while demonstrating a legitimate film technique. For McIntyre, material, style and subject each inform and influence the expression of the other. She describes working with film as being like “collaborating with someone that you care for very deeply—entering into a dialogue with them about what is and is not possible and being open to discoveries that neither one of you expected.” 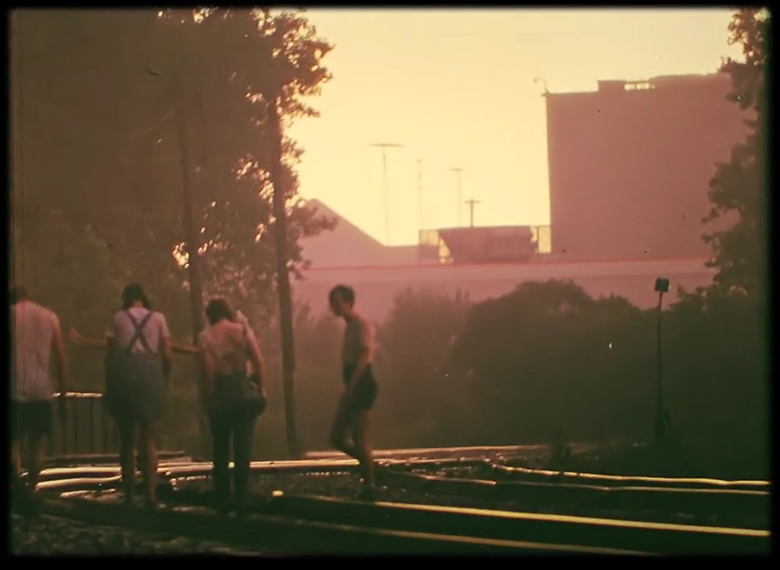 A deep but fractured connection to personal and family history is also woven through several of McIntyre’s films, as they record, refract, and obscure the past in a play of images and sounds. Though she never spoke, this is where her voice would have been (2008) combines a Fisher Price audio recording made by McIntyre as a child with black and white footage of a set of Caribou teeth belonging to her great-grandmother. We hear her grandfather suggesting, “Get your Grandma to say something,” but never hear her speak. As the title suggests, the voice of her great-grandmother is pointedly absent. The recording is broken up, interrupted; the film, sound and image never occur simultaneously. Both are abstracted, giving a sense of time dislocated and disrupted. The film expresses a desire to know what has been lost, obscured long ago by the passage of time. The viewer, in the cognitive process of watching the film, likewise attempts to put together the disparate pieces of sound and light and shadow. The substance of the film resides in what is missing: the absence of a voice, the refracted memory disconnected from time and space.

...working with film as being like “collaborating with someone that you care for very deeply—entering into a dialogue with them about what is and is not possible and being open to discoveries that neither one of you expected.”

McIntyre’s fascination with her matrilineal heritage is also the focus of Her Silent Life (2012), a compelling documentary of her family history. Her Inuk great-grandmother, once again the subject of the documentary, was brought south from Nunavut with an RCMP officer who wanted her for his wife, though she had a family of her own. Her grandmother left the family shortly after giving birth to her mother. The first time McIntyre ever met her grandmother is captured on film. We hear the voices of her mother and grandmother, disconnected from their images, recounting what they know, remember, and have heard from others about her great-grandmother. Her grandmother’s hands are one of the film’s primary images, the lines in her skin emblematic of the passage of time. Reflecting this image is another of her mother’s hands, marking the years passed between generations. The portrait the film creates of McIntyre’s great-grandmother is one that is incomplete, pieced together through scattered recollections, old photographs, footage of places and objects. In recounting a history, the film shows how history itself becomes obfuscated and illuminated as time goes by.

The passage of time is also explored in Ada (2010), which is as much a portrait of temporality as it is of its subject, an Inuk elder. It is McIntyre’s only film ever to be shot digitally. The old woman sits on a bed, hunched over her knitting, intensely focused. Her bare feet are stretched straight out in front of her. She seems like someone from out of the past, though her surroundings are modern. In one shot, a can of Coca-Cola shares the frame with her bare feet; in another, the television plays unheeded in the background. Shots of ticking clocks are cut throughout the film, showing the hours passing by. As she works, the camera examines her and her surroundings. Watching the film feels almost meditative, the viewer consciously experiencing the movement of time.

Other works, such as Bernard Gaspé (2013), a film shot along the train tracks in the evocatively named Montreal neighbourhood of Mile End, act as portraits of particular moments and spaces. The camera explores the life hidden in the quiet, industrial corners the city, almost as though searching for evidence that this is somewhere that people have been. Tattered debris flutters from a chain-link fence. A wide, hazy sky and translucent clouds are superimposed, dreamlike, over empty streets and graffiti and trash. From beneath one superimposed image emerges a group of young women, walking along the tracks. A summer rain picks up and they take shelter beneath a bridge. They linger for a short while before departing, following the tracks to some other unseen place. It’s a portrait of a transitory space, of a brief moment in time, of pausing for a short while and then moving on. 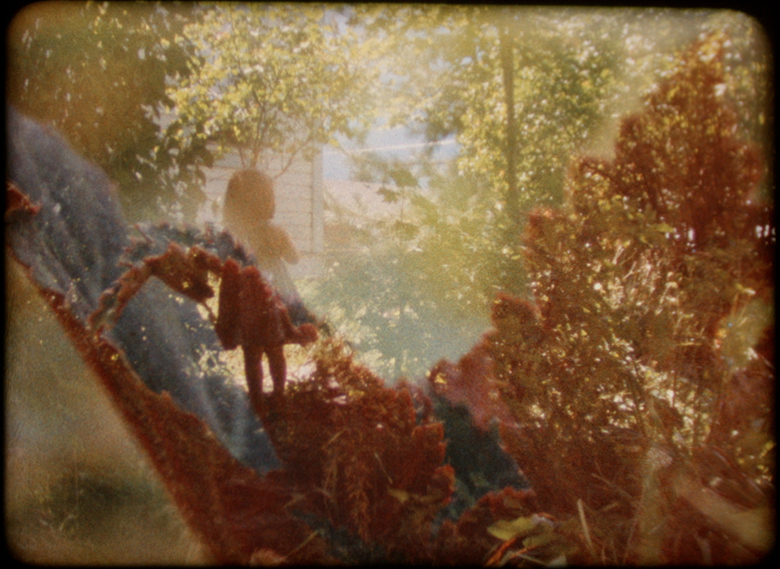 Lindsay McIntyre, In the Backyarden, 2015. Still.

With In the Backyarden (2015), a film featuring a little girl playing in and exploring her surroundings, McIntyre evokes the time and place of warm, childhood memories. The film is an exercise in looking. The camera’s gaze illuminates the strange beauty of the garden’s myriad curiosities. The girl’s pleasure in exploring her surroundings is ours: watching, examining the unusual textures, the simple beauty of everyday objects, the furry face of a dog, the fluffy, globular seeds of a dandelion, a ball floating in a pond. Each point of focus takes on an otherworldly fascination. The camerawork and editing, with curious close-ups and playful superimpositions, reflects fun and exploration.

A short version of McIntyre’s current project inquiring about the “death” of film, entitled Where We Stand (2015), is showing in the Untitled Art Society’s +15 Window at Arts Commons throughout the month of February. Shot on handmade 16-mm iodo-bromide emulsion, the film’s ghostly black-and-white images crackle with texture and life. A series of disembodied voices reflect on the history and future of the medium, accompanied by haunting images of abandoned movie theatres. In inquiring about the death of film, the imagery also acts as a meditation on the passage of time. The medium itself is brought to the foreground of the viewer’s consciousness, its unique quality acting both as a topic of discussion and an object of demonstration. McIntyre challenges our conception of film in a digital age. She says, “Film, now that everyone thinks it is dead or dying, is free to be all the things it could never be, restrained as it was by rigid commercial expectations and aesthetic conventions.  This digital age is a rebirth for a medium that no longer needs to be held to strict expectations about near perfect representation and regularity. I think it would be sad and ridiculous for industry to reject film as a medium, but at the same time, it opens up a whole new way of thinking for the medium that leaves so much room for exploration.”

Lindsay McIntyre’s work explores the possibility that, as the life cycle of commercial celluloid film draws to a close, the craft of independent filmmaking has been given a renewed vitality. Through film, subjects can be characterized, coloured, and disrupted by temporality; time and place can be experienced simultaneously and intentionally. Lindsay McIntyre’s overlapping images, disembodied voices, and dreamlike compositions recollect a journey—piece time together by hand.