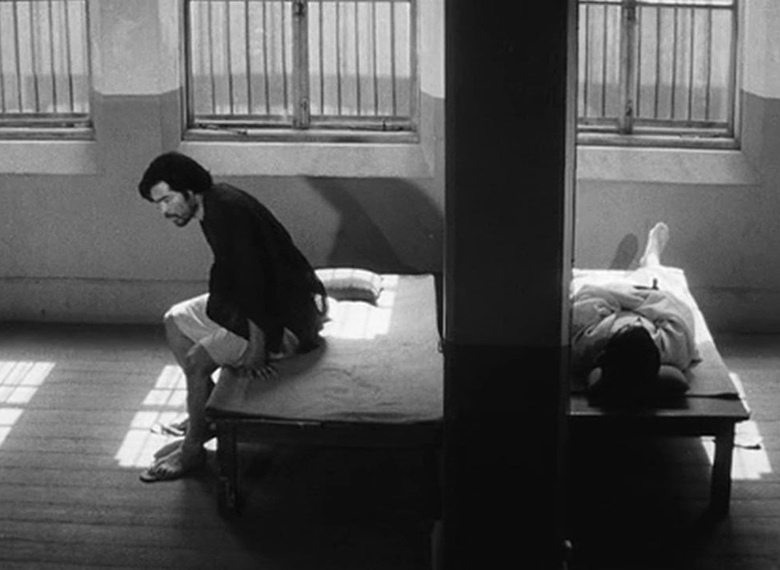 On home video, marketing is akin to curation. Arrow Academy (a U.K.-based label now distributing in North America) does as much with their recent set, Kiju Yoshida: Love + Anarchy, bringing three of the Japanese filmmaker’s works (Eros + Massacre, Heroic Purgatory and Coup d’Etat) together as a “political trilogy,” which seems fair given the films’ style and their reflection of Yoshida’s riffing on the same themes of romance and radical politics.

Kiju Yoshida was born in 1933 and, alongside fellow filmmakers Nagisa Oshima, Seijun Suzuki and Masahiro Shinoda, was one of the key figures in Japan’s ’60s Nouvelle Vague, making films that, like their French counterparts, were rooted in youth and burgeoning radical politics.1As stagey as his direction often is, Yoshida’s style is immediate, and immediately recognizable. He tends to split the frame top to bottom, hiding characters in corners or dropping them between angular bits of furniture, windows and doorways. The trilogy stems from Yoshida’s professed love of European cinema, and though he claims French cinema in the ascendant, watching them now, the films bear a closer resemblance to Michelangelo Antonioni. In particular, Antonioni’s bleak Red Desert (1964), which liminal, industrial landscapes and creeping dread closely resemble the enormous spaces and urban abandonment that appear throughout Yoshida’s trilogy. 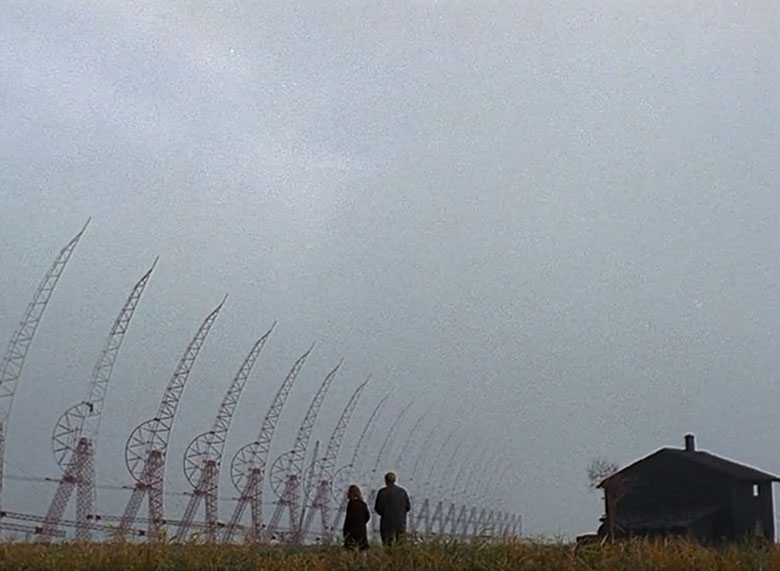 The first film in the trilogy, Eros + Massacre (1969), is presented in two cuts, theatrical (running nearly three hours) and director (an hour longer). Unlike most directors’ cuts that benefit from judicious editing, Eros + Massacre is best experienced in the longer cut, giving the film more room to breathe, unlike in the theatrical cut where the disjointed narrative comes across as unintentional and occasionally pedantic. It’s considered Yoshida’s finest film and it’s easy to see why, as it finds a middle ground between his more experimental ticks and verbose historical realism. The film centers on anarchist Sakae Osugi, who was assassinated in 1923, and his wife, the writer and fellow activist Noe Ito. Advocates of polyamory, which the couple sees as a natural extension of their political commitments, Yoshida uses the mashing of sex and politics as way of turning the film into a self-reflexive exercise that posits revolution (both politically and temporally) as a self-perpetuating trap. It’s a theme that weaves through the two films that follow. 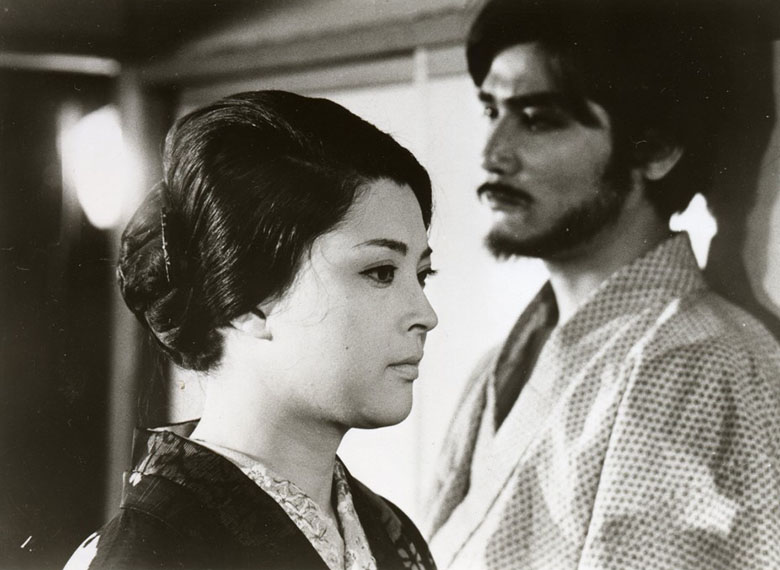 Unlike the other two entries in the trilogy, Heroic Purgatory (1970) reads like science fiction, time traveling between eras of political agitation and history, and pushing the image ahead of ’70s dystopian tales like George Lucas’s THX 1138 (1971). Though the revolutionary narrative is much the same as in the other two films—here, student radicalism on the eve of the Korean War—the presentation is much more elliptical, with characters exchanging the sort of philosophical student-speak one would find on-campus amidst enormous vistas of industrial and domestic emptiness. Largely plot-less, the characters act as philosophical dispensaries, done with stagey acting that would be all but anachronistic today but work within the film’s polemical spirit. Every shot is confrontational, pushing the eye towards half-hidden characters with half-hidden motives. Yoshida indulges his staginess here much more than the other two films, the camera jittery and unable to stay still, as if it can’t catch its subjects.

...we need to stop listening, stop looking, and return to the body. By the end of the trilogy, he’s redefined anarchy not as a chaotic and destructive act but one of purity and focus.

Except, of course, when it comes to love-anarchism embodied as sex first, ideals later. In an interview accompanying the Blu-ray, Yoshida said Heroic Purgatory was inspired by his belief that “revolution always shifts to armed struggle.” Further, that if revolutions begin with tragedy— violence born from an incompatibility between power and justice—then the cycle can only end by declaring it all a cosmic farce. As Theodor Adorno writes, “The splinter in your eye is the best magnifying glass,”2and unlike the more palatable Coup d’Etat that followed, Heroic Purgatory’s confrontational approach reminds us that a truly emancipatory politics is ever eminent. 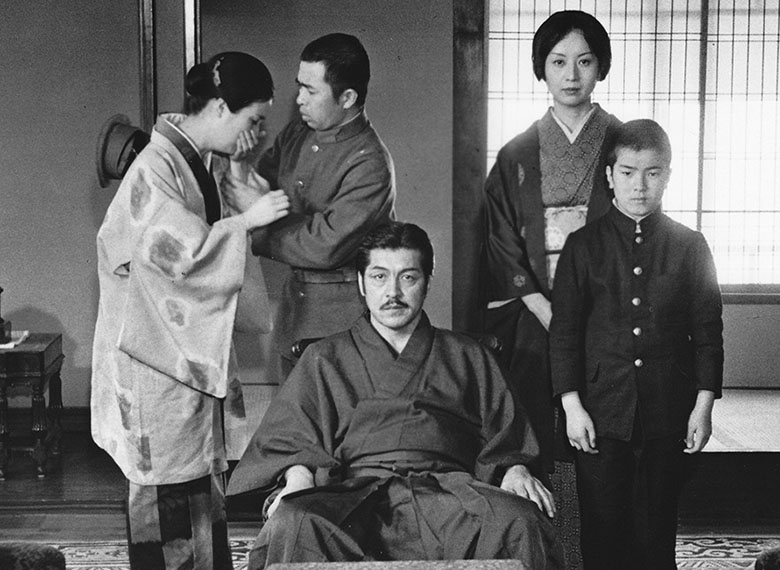 In the final film of the trilogy—the last film Yoshida ever made—Coup d’Etat (1973), Yoshida reaches back in history to February 26, 1936, when some 1,400 middle-ranking military officers, opposed to capitalism and encroaching Westernization, staged a revolt to return the country to its feudalistic foundations. Though the coup failed in its attempt to bring about a social revolution in the name of then-Emperor Hirohito, it took root culturally, finding its strongest acolyte in author Yukio Mishima, who committed seppuku (ritual suicide) in 1970 after a similarly failed attempt to storm the government.

The film opens with the murder of an elderly, wealthy financier. The murderer, we learn, was inspired by a nationalist screed (titled “Outline Plan for Reorganization” in the film) written by activist Ikki Kita, for which he takes responsibility. In true Marxist fashion, Kita posits the revolt as inevitable. As he says, “All great men are revolutionaries.” But, as Yoshida says in the other two films, revolution requires blood, something that Kita knows but cannot confront, finding release and penance for the violence growing around him by slashing his arm with a razor each night. As much as the film seeks to explain Kita’s fervent nationalism and what Yoshida posits as its ultimately misguided idealism, the film consciously shows that the Japan he fears losing is something worth preserving.

All of Yoshida’s formal approaches are on display, though they’re easily folded into the narrative, unlike the itchy eyeball-induced paranoia of Heroic Purgatory. He isn’t rushed, and the film has a much more meditative quality, aided by an atonal electronic and piano score that sounds like a jammed Atari. He pushes your eye to the limit, with much of the film looking near apocalyptic, so overexposed it’s as if it’s staring right into the sun.

Yoshida only shows the coup briefly, absenting the film from it until Kita’s told of its failure and urges the participants not to commit suicide, less as a point of pride and one made numb by violence. Though Kita wasn’t one of the officers who actively participated in the revolt, he was seen as its spiritual instigator, and was summarily executed. The film ends with him tied to a cross and shot by firing squad, crying in agony while his blindfolded face spouts blood. It’s the face of a revolution that, for all of its failings, is neither condemned nor praised by the movie and, by extension, the trilogy as a whole. Yoshida reinforces the deployment of the term “revolution” as an all-consuming faith, reminding us, as critic Fredric Jameson writes, that “our use of the generic term is metaphorical or even analogical, and demands the most vigilant suspicion.”3

While Heroic Purgatory offers a comment on our own modern awareness (and powerlessness) of mass surveillance, Coup d’Etat can’t help but be more surprising to modern eyes due to its raw political overtures. It’s the sort of film wholly alien to modern filmmaking and audiences, formally beautiful but using the medium to explicate on history as a political tract. In an age when the upcoming Captain America: Civil War offers audiences the only thing close to interrogating partisanship, confronting Yoshida’s films feels like genuine labour. The films are experienced as less temporal than dimensional, in that the viewer isn’t getting a glimpse into a past imperfect but an alternate reality, one that eschews pragmatism for embracing the body as a radical weapon. What Yoshida dares to suggest, so antithetical to our obsession with politicians’ Twitter posts and modern filmmaking’s art of the tease, is that we need to stop listening, stop looking, and return to the body. By the end of the trilogy, he’s redefined anarchy not as a chaotic and destructive act but one of purity and focus.

After the film was completed, Yoshida retired from filmmaking, and it’s tempting to comb Coup d’Etat for clues as to why, particularly as he himself saw it as the culmination of his life’s work and saw no reason to continue. We tend not to think of artists as retirees. Yoshida’s decision to cease creating leads one to question what it is he thought he was making, whether the aesthetic was serving the politics or vice versa. Knowing when to quit can be the most radical gesture—film, as a medium, is susceptible to turning anything it touches into gold—and perhaps Yoshida foresaw his work becoming counterproductive or misinterpreted. As Nobel Prize-winning economist Amartya Sen writes, “The reductionism of high theory can make a major contribution, often inadvertently, to the violence of low politics.”4That Yoshida avoided this while making such polemical works is a testament to their lasting power.