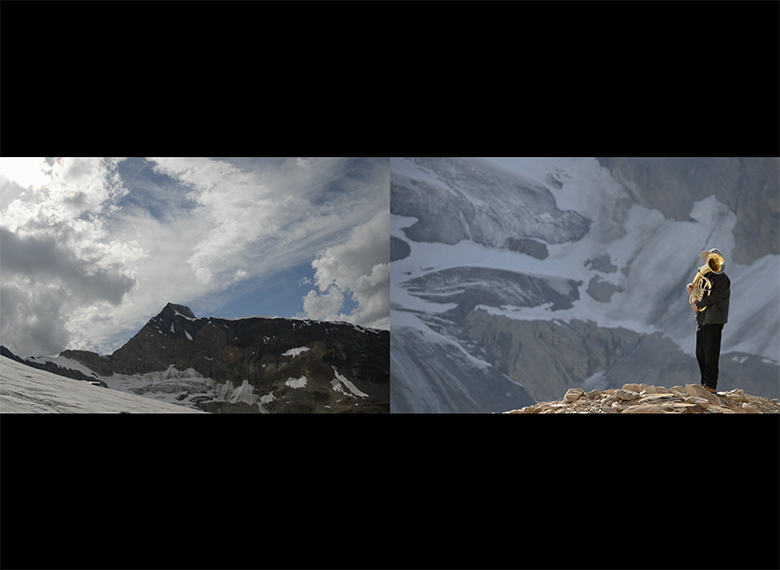 The melting of glaciers is a visual manifestation of climate change since we can see how quickly our Canadian glaciers are receding over time. A recent international study using satellite mapping has shown that glacier loss from 2015 to 2019 was greater in Canada and Alaska than other places in the world.1During this period, they discovered that glaciers “were losing 78 billion more tons of mass per year more” than 2000 to 2004.2What is particularly troubling is that glaciers are one of Western Canada’s most important freshwater resources.

To draw attention to this issue, Victoria BC composer and artist Paul Walde created Requiem for a Glacier, a forty-minute video installation and sound performance currently on view at the Montreal Museum of Fine Arts. Filmed on July 27, 2013, the Farnham Glacier is located west of Radium Hot Springs, in the Purcell Mountains range of the Kootenay region of BC. Fifty musicians and singers, and a camera and sound recording crew climbed the glacier to perform a four-movement oratorio.3According to the artist statement: “The requiem was created to memorialize the area, highlighting the threats that global warming and a proposed resort development posed to its environment.”4The panoramic shots of the glacier throughout the piece transport the viewer into the majesty and monumentality of the site. The sound performance is a reverential lament for the glacier’s rapid decline.

The text sung by the solo vocalist and chorus during the first two movements of the requiem are based on a Latin translation of a 2012 BC government press release that approved the construction of the year-round Jumbo Glacier Resort for skiing.5The last two movements were “based on temperature readings in the area from 1969 to 2010 and climate changes resulting from human activity.”6 Thankfully plans for the controversial development were finally stopped in 2020 and replaced by an Indigenous Protected and Conserved Area overseen by the Ktunaxa Nation.7

One of the first images in the video installation is of the chorus, shot from behind, being led by conductor Ajtony Csaba, music professor and symphony orchestra director at the University of Victoria. Everyone dressed in black to impart the solemn feel of the piece. Throughout Requiem for a Glacier, the human bodies appear ant-like in comparison to the immense and awe-inspiring backdrop of the mountains and glacier. I was continually struck by how small the people appeared given the enormity of human destruction of our natural world, including the enormous glacier that they traverse.

It is extremely fitting that Walde composed a requiem for this performance given this form of music is usually a mass for the dead, a means of commemorating loss that is typical sung at funerals.8 The music and libretto certainly feel mournful and melancholic. Here the requiem is performed as a song for the dying rather than the dead, for a glacier that is melting far faster that it should be due to climate change.

The video installation moves back and forth between whole and split screens, an effective way of showing the terrain as the viewer gets to see the site and the performers from many vantage points. Another choice that I found particularly effective was the inclusion of footage of parts of the process it took to create the piece. We see the performers and film crew trekking up to the site, again contrasting the miniscule size of the people with the glacier itself. They march slowly, single file, as if they were on pilgrimage to a holy site, carrying their instruments and recording equipment.

The piece could have consisted solely of shots that only showed the performance and performers on the glacier, but I think the inclusion of elements such as walking up to the site and boom mics in many of the shots lend a documentary aspect to the piece that pushes the message to the forefront. To show only the performers and not how they got there, or how the piece was recorded, would have transformed the piece into something much more surreal and other worldly. Using information from the 2012 press release and the rising temperature data to create the text for the libretto adds another important documentary facet to the work. The ways Requiem for a Glacier is shot focuses our attention that this is actually happening. The glaciers are melting, and we need to pay take action immediately.

Several times throughout the piece, the camera focuses upon the conductor. He stands alone, in the centre of the screen on an outcropping of rocks, facing the glacier in his tuxedo tails. He raises his arms and conducts the music. As we cannot see any of the musicians and singers in these shots, it is as if he is conducting the glacier itself and the mountain is responding by singing about its own demise.

These images reminded me of the iconic 1818 Romantic painting Wanderer above the Sea of Fog by German artist Caspar David Friedrich.9 In the painting, Friedrich also stands on a craggy rock face, overlooking a mountain range with his back to the audience. While both the painting and the video installation draw the viewer’s attention to the power and magnificence of nature, they are quite different it their messages. I have always interpreted this painting, in keeping with the tenets of Romanticism, as an exaltation of the individual. Friedrich shows himself as able to conquer the environment and become the king of all he surveys. In contrast, Requiem for a Glacier demonstrates what human individualism has wrought: the increasing destruction of nature which could ultimately lead to our own demise.10

In another section of the video installation, a woman attached to a safety rope, slowly and methodically walks across the glacier. She is singing with sheets of music in her hand, seemingly communing with, and offering homage to, the glacier. Shots of the line of the rope and her footprints in the snow confirm where she has walked. We see her traverse the entire screen, entering from the left until her feet disappear at the far-right corner of the large projection.

I was recently in the east Kootenays, very close to Farnham Glacier, with an experienced alpine and glacier hiker who told me about falling into crevasses while hiking glaciers and having to be pulled out by the security ropes attached to his body. These stories were very much on my mind as I watched the singer cross this glacier. I held my breath as she gingerly and purposefully took each step, navigating and stepping over crevasses. Her disappearance from the screen makes me think about how we, the human species, will also disappear if our water resources become completely depleted. 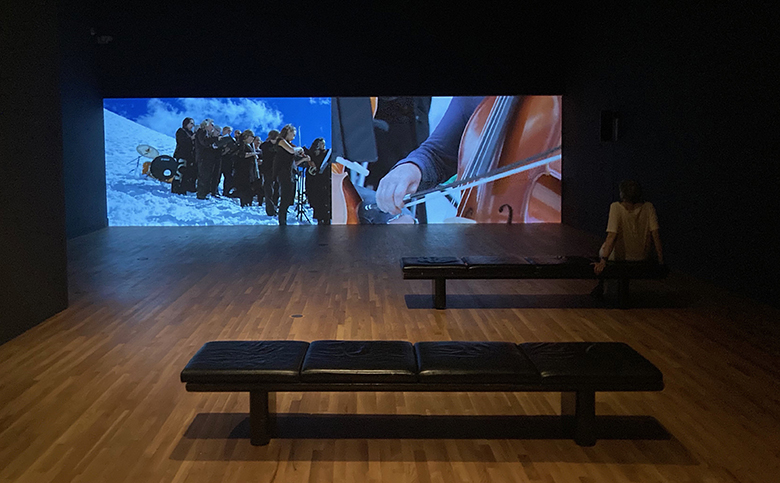 The installation of Requiem for a Glacier at the Montreal Museum of Fine Arts is particularly effective. The twenty-two-foot-long screen takes up the entire wall of the gallery, reflecting the monumentality of the site. As it reaches right down the floor, it feels as if you could walk right onto the glacier. If you get closer to screen, your shadow becomes part of the work. The gorgeous wood floor provides a serendipitous symbolism to the piece. The trees have been transformed by human hands into planks as the glacier is being transformed by human created climate change. Both continue to be beautiful, but they are not what they used to be.

Another strength of the piece is the use of close-ups of the terrain of the glacier, many of which focus of the large rivulets of water flowing downward. In a number of shots, the dirt looks blood red, as if the glacier is bleeding as it melts. These shots reminded me of paintings of logged forests by the BC artist Emily Carr. In her paintings, such as Wasteland (1938), swaths of blood red earth symbolize the damage done to the environment through forestry. I was struck by how the red deposits on snow of the glacier looked like so much like Carr’s paintings. The continual movement from the macro to micro in the editing of Requiem for a Glacier, from a view of the entire glacier to the performers, to the rivers of run-off water, give the viewer a greater understanding of how quickly the glaciers are melting. During breaks in the music and singing, the sound of running water fills the gallery space. The close-ups of the glacier and the sound of water draw the viewer into an understanding that is both visual and auditory.

I noticed during my recent trip to this area that the water levels of the rivers were much higher than I had ever seen them. Scientists have found that these rising water levels are due to increased glacier melt. Dr. Thomas Pypker, hydrologist professor at Thompson Rivers University who specializing in water management and climate change, speaks about the heating waves we are experiencing this summer: “In the past we’ve had extreme heat waves. The reality is we’re going to have them more frequently, and those more frequent heat waves are going to then cycle back and feedback into melting the glaciers faster…That’s the litmus test – one-off heat waves are not a proof of climate change, but the fact we’re starting to see an acceleration and a repetition of them is the alarm bell. I’m hoping the only good thing to come out of this heatwave is maybe we, as a country, recognize, OK, this is a problem, and we need to actually do something about it. Our governments talk a lot about it, but they don’t, up to this point, do a lot.”11

One critique I have is of the inclusion of a black box which appears twice in the piece. During one section, the box begins in the centre of the screen, as seen in the above still, and grows to obscure the entire screen. The music swells, becoming more dramatic as the box grows. I found this symbolism to be heavy handed and unnecessary. While I thought the use of the black box to be too literal, perhaps that is what is required to shock the viewer into considering the gravity of the situation, to reflect upon what it would mean for our glaciers to disappear entirely.

Although created in 2013, Requiem for a Glacier is even more relevant today than when it was created. A recent report by The Intergovernmental Panel on Climate Change, the United Nations body that assesses science related to climate change, provided sound scientific evidence that time is running out much faster than we thought.12 The UN Secretary General Antonio Guterres called the report “a code red for humanity,” and said, “The alarm bells are deafening, and the evidence is irrefutable. This report must sound a death knell for coal and fossil fuels, before they destroy our planet.”13 Not only are the glaciers melting, but we have seen the devastation wrought by increased and large spread forest fires across Canada this summer. During my trip to the Rockies in early August, there were days when I couldn’t even see the mountains due to smoke.

We need to act now in relation to climate change. One thing we as Canadians can do as we head into a federal election is to vote for people who are serious about battling climate change. We can put pressure on your MPs and MLAs to create stronger climate laws. The problem cannot be solved by individuals alone, corporations and governments need to step up and enact the recommendations of reports such as those by The Intergovernmental Panel on Climate Change. As the recent UN report draws our attention to, it will be too late to save ourselves much sooner than we think.

Requiem for a Glacier is currently on view at the Montreal Museum of Fine Arts: https://www.mbam.qc.ca/en/works/76016/

For more information about Requiem for a Glacier and Paul Walde, visit: http://paulwalde.com/projects/requiem-for-a-glacier/

The Art Experience vs The Art Object: Performing Arts in the Digital Realm