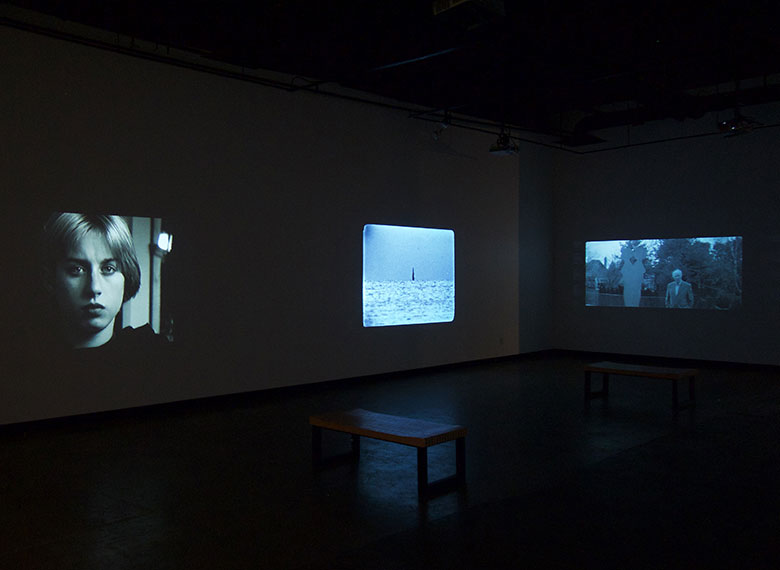 Canadian artist Michael Snow once described his own experiments with moving images as an attempt “to make a definitive statement of pure Film space and time, a balancing of ‘illusion’ and ‘fact,’ all about seeing.”2To that end, Snow’s body of work can be understood as a conversation with, exploration of, and critique about form itself. One of his methods included ‘re-presentation’ which refers to a “variation that alters meaning.”3 A re-presentation endures the legacy of the so-so-called ‘original’ artwork (as noun), making it work (as verb) again...and again...and again. Engaging in this type of variation-on-a-form forces an artwork into dialogue with its own history, creates a conversation with other forms or contexts, and breathes life into what is an otherwise dead/finished text.

VARIATIONS, an exhibition curated by sound artist Mark Templeton, adapts Snow’s 1957 poem—titled “Poem”—into nine moving image and sound works made by twelve artists (two collaboratively). Having made its way from Latitude 53 Contemporary Visual Art (Edmonton), and the Alberta Legislature Building (Edmonton) to its current home at the Gallery of Alberta Media Art (GAMA) (Calgary), and Casa (Lethbridge), the project has also been released on DVD by the Edmonton-based label, GRAPHICAL, making it available internationally and at local old-school record stores in Edmonton, Calgary, and Montréal. The project’s DVD release allows not only the twelve artists, but also the local record-store-goer, to actively engage in a re-seeing of one of Snow’s written texts on the subject of form. If “Poem” is ‘about’ the impossibility of seeing, and the elusive nature of seeing itself, then VARIATIONS is about the transformation of seeing via the adaptation of formal properties such as form and venue.

Although it is actually quite boring and reductive to do so, we still tend to cling to the idea of an artwork as a unique, singular, and exclusive text. VARIATIONS forces an intertextual reading of Snow’s work—both of “Poem,” as well as of Snow’s larger oeuvre—in a way that diminishes the fixity of all the texts involved. As New York University film historian Robert Stam has pointed out in relation to adaptation, “film,” or any other media for that matter, “is a form of writing that borrows from other forms of writing.”4However, in most works, this process of circulation is either suppressed or, at best, left implicit. In VARIATIONS, it is the very modus operandi, and the subsequent dialogue formed between the works is both explicit and alive. The borrowed writing, here, is permitted to exercise its appropriative and diffusive nature.

...bearing witness to a conversation both with, and about, the legacy of Snow himself.

In what artist/writer Artie Vierkant describes as our ‘post-internet’ culture of viewer-as-author, the goal of any creative project should be “to present microcosms and create propositions for arrangements or representational strategies.”5VARIATIONS has done precisely this, but where Vierkant also argues against the necessity of referencing (or even knowing) any original source, Templeton includes the original in the colloquy. By keeping both Snow’s “Poem,” and a portrait of Snow’s personal likeness front-and-centre in both the exhibition and DVD presentations, it is clear that Templeton’s interest lies—like Snow’s—in historical methodology itself.  Even though VARIATIONS as a project borrows directly from Snow’s written words, some of the individual works in the collection also draw from Snow’s other body of texts—his films, his paintings, his drawings, and his sculptures. In this way, viewing VARIATIONS is also a bit like bearing witness to a conversation both with, and about, the legacy of Snow himself. 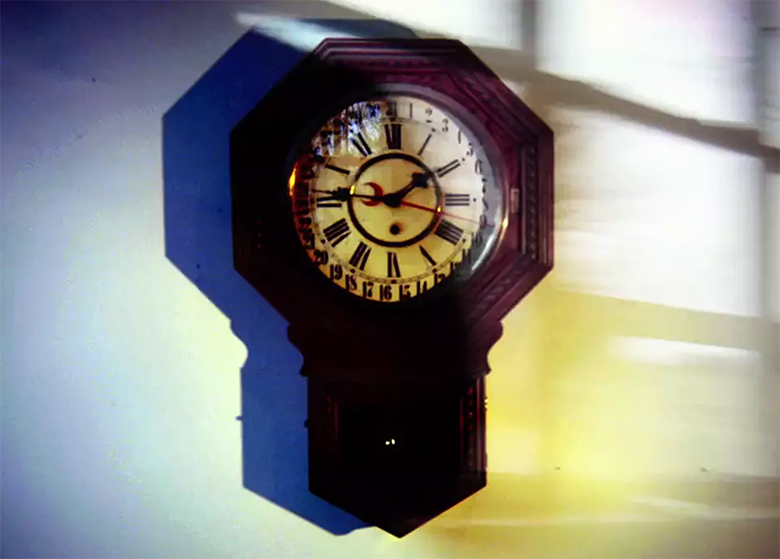 For instance, in one of VARIATIONS’ most literal iterations of re-presentation, Stephen Broomer and Stuart Broomer re-create at least two (if not more) of Snow’s works including his 1960 Lac Clair painting with their piece, Variations on a Theme. The Broomers film a continuous shot of a body of water framed by a piece of plexi-glass which has been mounted on an easel. An anonymous pair of gloved hands affixes paper adhesive tape to each of the plexi’s edges. In her Art Institute-produced monograph on Snow, art historian Martha Langford relates that Lac Clair was initially intended to be a representation of the process of making itself but in the end, reminded Snow “of his Levesque grandparents’ cottage on a small lake near Chicoutimi, Quebec.”6 The Broomers’ version functions like a pseudo-documentary-imagining-writ-visual of Snow in his studio, playing around with the materials that were forever so deeply preoccupying him...at least, as a viewer. The construction of the video is really a re-creation of Snow’s playing around with materials, re-tracing, as it does, Snow’s fingerprints to examine how his processes might translate in an adapted form. Later in the same video, the Broomers try another way to conjure Snow. This time via the sinister children’s game, Bloody Mary: re-making Snow’s Midnight Blue (1973-74) right inside the bathroom mirror. 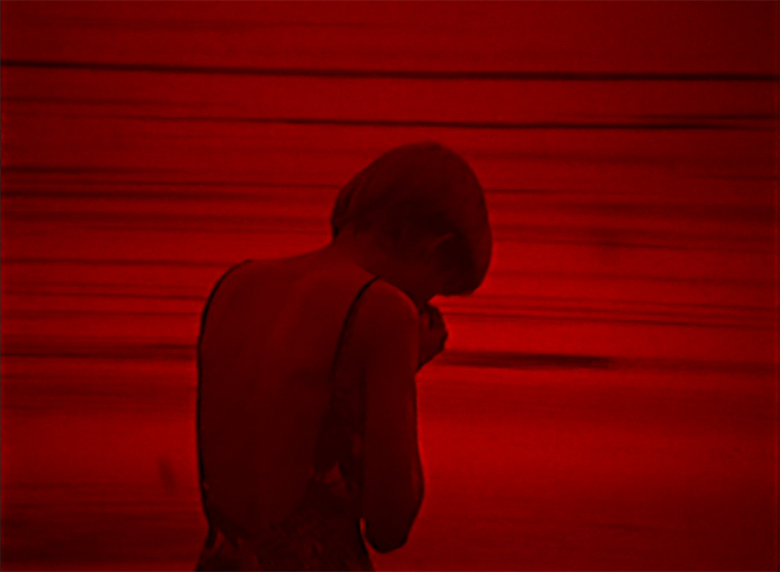 Similarly, though less literally, the first 1:45 of Evangeline Belzile and Ian William Craig’s Untitled in VARIATIONS looks a bit like a moving re-presentation of Snow’s 1965 Test Focus Field Figure painting, with its three ‘test-takes’ of Snow’s famous Walking Woman subject. Belzile and Craig’s 3D subject even sports an unusual, angular hair-cut that looks how we might imagine the Walking Woman’s 2D ‘haircut’ might appear to us if we could encounter ‘her’ in 3D, or at least, beyond ‘her’ flattened, detail-less ‘self.’ 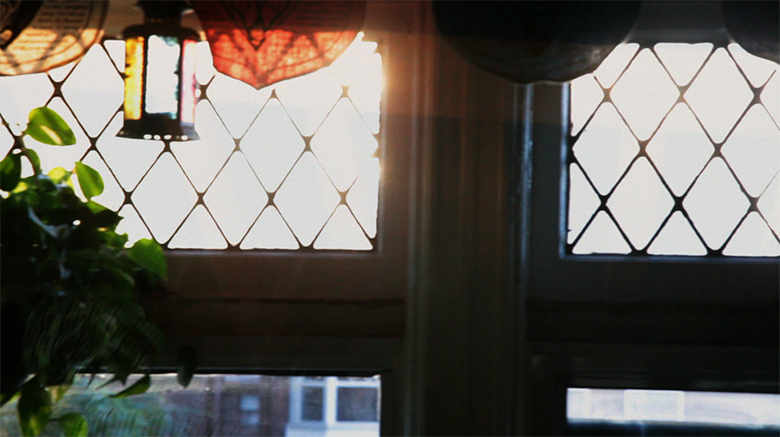 Snow’s works and methods are re-presented and re(-)ferenced both aesthetically and formally throughout VARIATIONS. Dan Browne and Steve Richman’s Poem riffs on Snow’s concerns for framing by transcribing some of his experiments with 360° panning to reveal the spatiality-behind-the-frame, with his recurring window-as-frame motif, and with his self-referential glimpses of the filmmaker/videographer/artist-behind-the-frame à la Snow’s 1969 Polaroid-mirror take on Authorization. Mani Mazinani’s Over, Under transfers Snow’s study of colour transparencies and lighting in works like his 1998 Place des peaux installation into a percussion-y meditation on the digital filtering of light. And Christine Lucy Latimer gives us a Fraction Refrain of Snow’s slow, painstaking fracturing of any comfortable or traditional depiction of time, content, movement, and narrative. 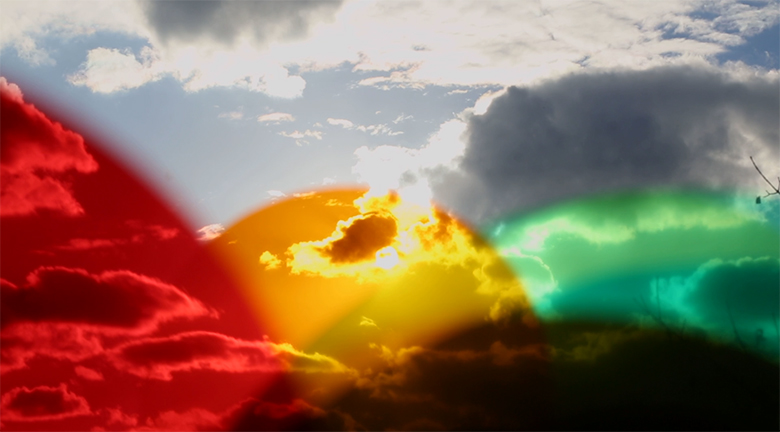 Although conceived by Templeton as a project in its entirety, each of the works in VARIATIONS stand alone as a meditation on a particular word, grouping of words, feeling, or narrative from “Poem” itself. Kyle Armstrong and Mark Templeton’s Untitled spends three minutes refashioning the frustration of Snow’s elusive “It” to reveal their own “It”—a strobing patch of indistinguishable forest. In contrast, Clint Enns turns Snow’s “It” into a laboratory mouse in what could be one of Snow’s own experiments with the effects of reflections and mirrors on photographs, and film. 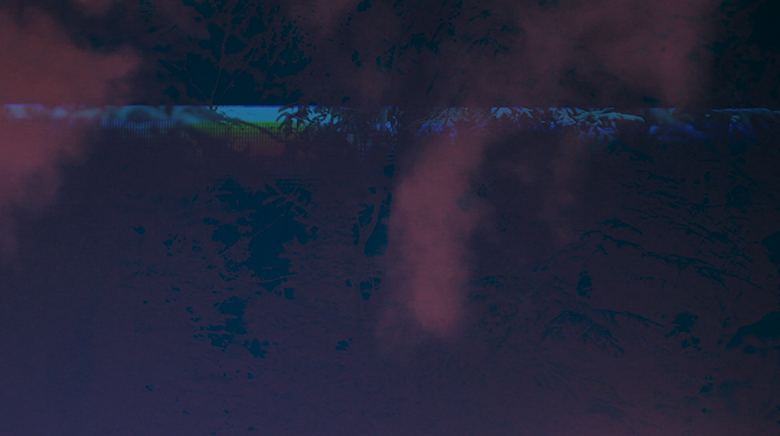 Furthermore, the individual works also contain references to the lives and practices of their makers. The remainder of Belzile and Craig’s Untitled, for example, feels like a narrative depiction of “Poem,” where the “It” of Snow’s poem is an actual person whom the filmmakers struggle to recall with clarity, but whose image keeps getting interfered with by peripheral memories. Except at the end, where the person/subject is finally brought mostly into focus, albeit in black and white, until: “just as / quietly / it was / gone.”7Accordingly, Browne and Richman’s “Poem” shows us what we want to assume is the actual personal space of one of the artists’—a room in his apartment: complete with his cat, his plants, his view to the street, and even his baby!

VARIATIONS, as a whole, places the viewer in the present of a body of works from the past. Snow himself once bemoaned the “lifelessness of artistic representations, even when celebrating their timelessness.”8But, one could also say it is because of their timelessness that representations seem to exist apart from our own temporal space of lived reality. This is challenged by the process of adaptation, which creates a ‘living’ conversation between otherwise temporally, and materially unrelated texts. The works in VARIATIONS respond back-and-forth to “Poem,” but they also discuss infinitely amongst themselves. Isn’t this a form of living—whether as an act of homage, commentary, revision, exploitation, or otherwise? Perhaps not in the way Snow continues to strive for, but it does chip away at the fixed materiality of media (/mediums) itself (/themselves). At least, just long enough so that “A corner of it just a fraction / was visible if you peered”.9