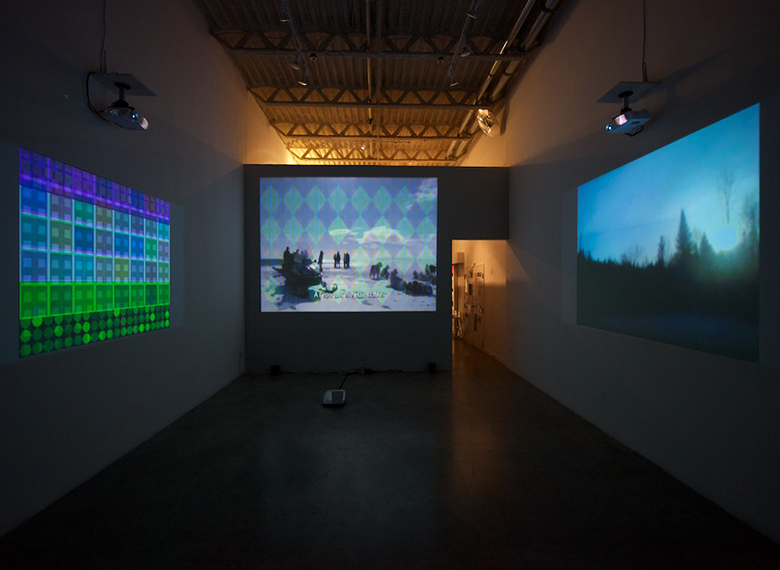 There is a well-documented tradition in Canadian art to consider the landscape as an inseparable part of the Canadian psyche and an integral aspect of national identity. The North in particular—an abstracted, romanticized version of it, at least—has taken a leading role in defining the uniqueness of this nation.

And yet, some seventy-five to ninety percent of all Canadians live within one hundred miles of the American border, and even fewer have ventured to the northernmost regions. In the national imagination, the North remains a symbolic, rather than actual, feature of Canadianness, conveniently summoned as needed and then surreptitiously set aside.

But for Montreal-based artist and electronic musician Geronimo Inutiq—also known as DJ madeskimo—the North is not merely a mythological frontier to be mined for inspiration. Taking Glenn Gould’s celebrated 1967 broadcast, The Idea of North, as his catalyst, Inutiq’s three-channel installation, ARCTICNOISE, re-positions the North in Canadian mythology in relation to the lived experiences and cultural practices of those who live and work on the land. Tied together by Inutiq’s experiences growing up in Iqaluit, Clyde River, and Montreal, ARCTICNOISE questions and dislocates the North as it exists in reality from the idea of the North that has dominated our collective national consciousness.

Commissioned by the CBC as part of its centennial celebrations, Gould’s radio documentary, just shy of one hour in length, debuted on December 28th and became the first in what is now known as the Solitude Trilogy. Embracing a contrapuntal compositional style that blended together five individuals describing their first-hand experiences of the North, Gould created a meandering narrative guided by a metaphorical journey to Churchill, Manitoba aboard the Muskeg Express. It was a journey that Gould himself had undertaken, and it left a lasting impression on the eccentric artist. The sound of the rattling train is a constant undercurrent that buoys the speakers’ voices as they discuss the appeal of the North, their experience of the land, and their aspirations and predictions for the future. Aesthetically, the broadcast’s carefully orchestrated rhythm and the cadence of the voices are a reflection of Gould’s career as a concert pianist and his lifelong interest in the breadth and possibilities of musical artistry.

A collaborative project with Toronto-based curators Britt Gallpen and Yasmin Nurming-Por, ARCTICNOISE is a contemporary extension of and response to Gould’s conception of North. Inutiq samples footage from six films from the Igloolik Isuma Archives that, together with audio excerpts from the CBC original, create a work that is rooted in a particular, individual relationship to the North with far-reaching implications.

The principal video, which greets the viewer first and faces the gallery’s entrance, is comprised of a series of digitally re-worked film fragments that articulate the relationship between the North to the rest of Canada as seen and told through the eyes of those who inhabit the region. Inutiq lends the material a nuanced re-interpretation, bringing out the stories and character of the subjects and lending a personal touch to their voices. Running on a fifteen-minute loop, it touches on an array of politically charged themes including cultural imperialism, issues of self-governance, and the effects of climate change, among others. Subtitles and audio content fluctuate between English, French, and Inuktitut—a linguistic mix that can obfuscate meaning and negate rigid, linear narratives, while also functioning as an analogue to the intertwined voices that comprise Gould’s program. Its rhythm oscillates between extended contemplation and more rapid sequences, mirroring the structure of Gould’s broadcast, which saw monologues dissolve into a cacophony of voices fading in and out of audibility.

...the North has remained for me, a convenient place to dream about, spin tall tales about, and, in the end, avoid.

On the left wall is a compilation that cycles through a sequence of seemingly unrelated footage, including edited archives, pop-culture imagery, and cross-cultural references. Some clips are vaguely recognizable, such as the Warholian representation of a lone kayaker, while others are geometric abstractions and vividly rendered distortions that elude legibility and clarity.

The right wall documents a journey through the Parc de la Verendrye, located just less than four hundred kilometres northwest of Montreal. Backlit trees pass in rapid succession and fragile sunlight escapes through tangled branches, creating an impression of the landscape that is both vast and claustrophobic. It’s the most direct connection to Gould’s broadcast and to the historical importance of the landscape in Canadian art. Its consistent rhythm positions the film as a visual parallel to the incessant train sounds that prop up Gould’s program. Unlike its more visually impressive counterparts, the subdued presence of the film alludes to its ancillary role, providing a balancing perspective to an installation that, at times, threatens to overwhelm the senses.

Considered as a totality, ARCTICNOISE borders on the surreal. Inutiq’s self-taught background in electronic music translates Gould’s rhythmic structure into a spectacular multimedia collage, generating a cohesive but by no means conclusive account of the North. Projected across three walls, ARCTICNOISE exists as an immersive visual and aural spectacle that encompasses the viewer in a kaleidoscope of colour, movement, and sound. Its unpredictability subverts obvious interpretations, yet it retains a sense of the personal and intimate. Like Gould’s original broadcast, which takes as its premise the notion of overlapping conversations in a dining car, Inutiq situates his work at the intersection of an important, decades-long discussion that has only recently considered the role of Inuit oral and material culture in the modern world. 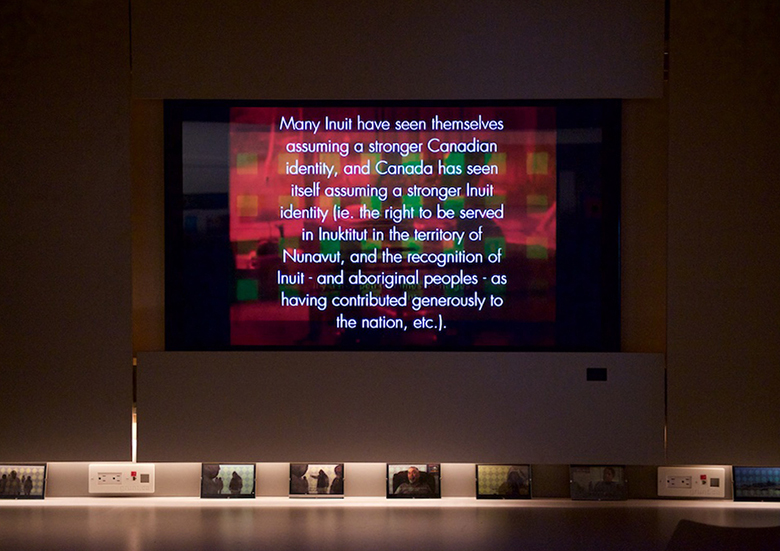 Gould’s interview subjects are, like himself, southerners who have, for some reason or another, temporarily journeyed to the North. The thread of thought that unifies these characters is a belief in an idea of the North as a land of self-discovery, though unknowable and ultimately impenetrable itself. Gould himself states that he has remained, “of necessity, an outsider. And the North has remained for me, a convenient place to dream about, spin tall tales about, and, in the end, avoid.” Gould’s North is a fiction firmly rooted in his era and one that was enabled by its relative inaccessibility at the time, which lead to the relegation of the North to an untamed, frontier-zone. For Gould, the North operated as a sort of symbol of purity and immediacy—an isolated land, an unadulterated and malleable space removed from the perceived corruption of the southern, urban parts of the country.

Markedly absent from Gould’s broadcast are the voices of the permanent inhabitants of the North themselves, and it is these voices that Inutiq reclaims. Where he succeeds most is his ability to empower these voices in a manner that is neither reactionary nor pedantic. During a panel discussion, Inutiq distanced himself from assertions that he was engaged in a deliberate political critique, although he acknowledged the possibility of reading such messages in the project. Even the title, ARCTICNOISE, belies the carefully choreographed assemblage of material and reinforces Inutiq’s resistance to imposing narrow and rigid frameworks of interpretation. ‘Noise’ bears connotations of discordance and suggests a distinctly unstructured collision of sounds and ideas. Given the content and subject matter of the films sampled and the discursive practices employed, it is difficult, if not impossible, to isolate the ARCTICNOISE project from the legacy of cultural imperialism and national mythmaking that it challenges.

The flexibility of new media—its adaptability and its responsiveness—is a boon to this project, which positions itself as a conversational starter rather than a prescriptive lesson in political correctness. Co-curators Gallpen and Nurming-Por stipulate that future iterations may adopt alternative modes of display, meant to better relate to the exhibition space, and that the content may also shift throughout the installation’s existence. The fluid arrangement is meant to, “negate any concrete or authoritative understandings of what the North is or might become.” It is a curatorial approach that doesn’t always succeed, but ARCTICNOISE demonstrates real potential, especially as the project grows in scope and as new discussants weigh in on the conversation. Whether or not this is the case is yet to be seen, as ARCTICNOISE tours the country, just finishing its Ontario Premiere at Trinity Square Video November 17th, 2015.