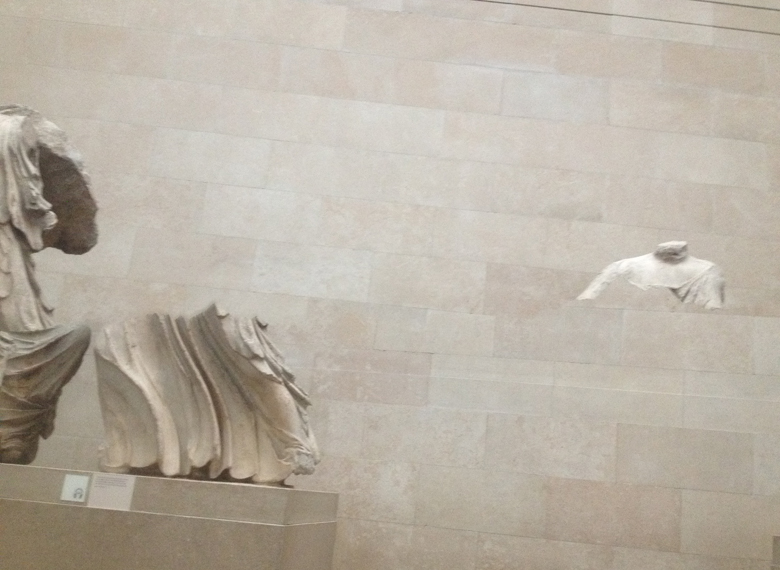 "We were taught art history wrong."

Allison Leigh, Postdoctoral Fellow at Cooper Union, stood up in a room full of the world’s most influential Media Art Historians and ethicists—a room built upon existing systems—and told them art history is dying. She urged the faculty of the 2015 biennial Media Art History International Conference to stop regurgitating the same stories. Re-think what it means to be an agent of history. It is not dead; it is here, to be interacted with. Allison Leigh was awarded the Emerging Researchers Scholarship after her talk.

History—time itself—is interchronological. It has been taught to us as a long story, a narrative of such scale and distant magnificence that we can only look on it as hicks glimpsing the divine. But this relegation to a proletarian view-from-a-distance is what has been the biggest detriment to our understanding of history, this understanding of time as a linear arc that is rendering it lifeless, eyes rolling back.

As we play with art history, it comes alive again, like a child that has been neglected. We see how it intersects with the lady eating a panini beside me, with my shower this morning, with ancient stone figures buried on another continent. We see that history is unapologetically and continually entangled in our real lives, action and non-action united. It is what Leigh calls synartesis: “a state of being knitted or fastened together.”

Luma’s second issue finds itself resonating with these interchronological understandings of time and history. We invited Mark Clintberg to interview Jacob Wren and Jeanne Randolph, to gather their reflections on Calgary’s cultural climate after spending the summer leading The New Gallery’s Art Writing Residency. Jacob and Jeanne believe that art criticism—like synartesis—should be open to all material and can take all forms, including reflections on one’s city. During the course of the interview, they go on to discuss Calgary as a fertile but oppressive milieu, a brutalist-business oil city where most artists and writers are not thriving, but merely surviving. I’m not surprised by this, I’m sure you are not surprised by this; this is Calgary™! We are waiting for time to take our city to better days, waiting for Contemporary Calgary to realize why artists here are resistant to mega-brands and bourgeoisie fundraisers, but see, in this conception of time lies the problem.

Expressions of time as an infinite loop weave their way through Robert Altman’s dynamic body of work, reviewed by Brianna Strong in this issue. Written with a lilt and musicality that parallels Altman’s oscillating, poetic rhythm, Strong describes the layering of Self and Other, past and present, the inside of the car and the outside of the car. Altman dissolves the spaces that divide us—or rather—gives those spaces form. He sketches “our inherent connectedness by virtue of being social beings,” and storms the limits—if there exist any—to that connectedness.

Filmmakers Kyle Whitehead and Stephen Broomer, in communication from cities on opposing geographic sides of Canada, also give form to interstitial spaces using film superimposition to create epiphanic chance collisions. In quiet rebellion against standard methods of filmmaking, Whitehead and Broomer cultivate new, nonlinear understandings of time as related to the film object. The very nature of the image possesses time as an intrinsic dimension—if this is so, then superimposition is the layering of two time qualities. What narrow, oscillating space breathes between the two records of time, if any?

Embodiments of interstitial space, interpreted in absentia, are prone to imaginative inaccuracies, one of the vastest inaccuracies being the Canadian North. Geronimo Inutiq’s three-channel installation, ArcticNoise, reviewed by Weiyi Chang, responds to and ultimately rejects fanciful visions of the North as a great and mythical, empty space. Instead, he repositions invented southern Canadian perspectives of the North in relation to real people and real experience, layering archival film, video footage, pop culture and cross-cultural references. Inutiq resists any rigid definition or linear narrative of the North, much like Leigh’s insistence on resisting linear definitions of art history, placing it instead within a network of experiences across time. If it is true then, that space is not just space, but is in fact object, perhaps what Whitehead and Broomer have created between exposures is not interstitial space, but another rich ecosystem, a unique culture all its own.

Mark David Turner, in his essay “A Revolution (Briefly) Embodied,” fills in a part of this network for us, describing activism in the Canadian Inuit Nanangat from 1972 to 1973. This period, where literature and audio-visual media provided an accelerated platform for circulating their immediate social and political circumstances, gave shape to voices previously unheard. History of the deeply affective events and films made during that time—or any history of indigenous people working in contemporary mediums at all—is virtually untaught in our art or Canadian histories.

At the Media Art History Conference, I was honoured to meet Skawennati, media artist and indigenous futurist. We bonded over how tea is better for you than coffee. During her own talk, she spoke about the gaping absence of indigenous people in representations of the future, and in media art. Surviving the threat of extinction is not enough—we are looking to thrive: at the forefront of cybernetics, of film studies, land rehabilitation, the exploration of new power sources, all contemporary fields. Visions of Charlize Theron, Tom Hardy, Bruce Willis, and a bunch of models ruling the world have permeated our ideas of the future à la Mad Max (2015) and The Fifth Element (1997): a bleak, tenderness-less future I certainly wouldn’t want to be included in. Let’s pull our future toward ourselves, the future where diversity is thriving, not just surviving, where we don’t exist in a desert—of the mind or body. Fold time like it’s origami. We were taught art history wrong, but don’t have to continue teaching it that way.