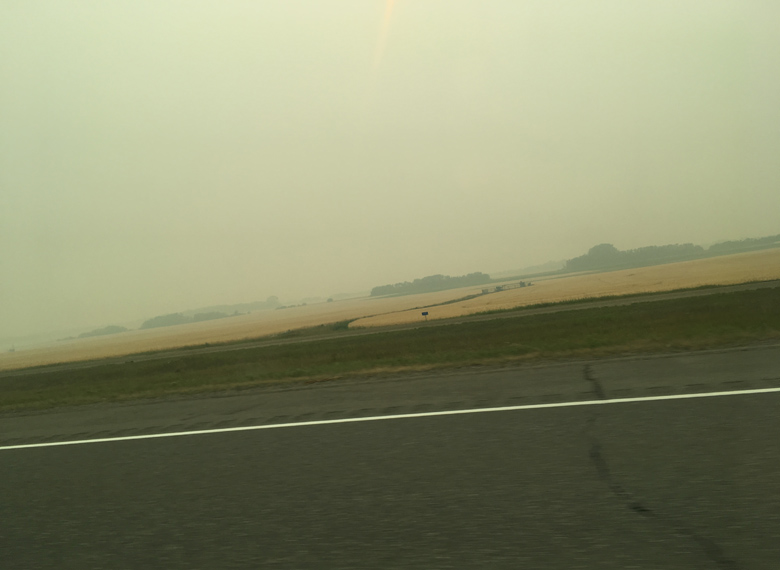 My mom and I were on Highway 2, travelling back to Calgary. My dusty bare feet were up on the dash, playing in the warm sun. The windows were down, and we were listening to something with twang, maybe Twain. Unbeknownst to me, a bee flew in, and went straight down inside the back of mom’s shirt. With one hand still on the steering wheel, hooping and hollering a little bit, she started shaking open her shirt with the other, trying to let the bee escape. It was stinging her repeatedly. She pulled over, jumped out, and ripped her shirt off. I was a little scared at this point; she had never done this before. She walked down into the highway gutter and started spreading a smooth layer of wet mud onto her back with her hands. The cool mud was to sooth her stinging and swollen back, and draw out the stinger—it’s what she told me to do whenever I got stung. Satisfied, and wiping her hands on her jeans, she walked back to the van and got in. She started up the van and we drove into the city, my mom shirtless beside me in traffic, unfazed, and even invigorated.

When I think of this image of my mom, I can feel her power. It was like some sort of magic, powers. With nothing but land in sight, she quickly and assertively mixed a natural magic potion for her own healing. In nature, she was not a hapless damsel overwhelmed by the expanse of the landscape, like much of Western cinema would have us believe. She was, and is, an absolute tank in the wilderness. And, done in a delirium that could have been mistaken for that which made Ken Russell’s The Devils (1971) so disputed, the whipping off of her shirt was definitely part of that power. Under the weight of misogynistic patriarchal colonial history, her natural body had power in that moment to me as a nine-year-old, and still now as a 28-year-old. Honestly, the world should be safe enough for all sexualities, genders, ages, and physiques to clothe and de-clothe when and where we see fit, to wear oversized green pants and orange plastic sandals, or, say, grind on a consenting adult, and to do it all without fear, quite literally, of the man.

On the verge of beginning my graduate studies in the Modern Languages and Cultural Studies department of University of Alberta, this is my last issue in the mind-expanding, adrenaline-showering, and humbling position that is editing for Luma Quarterly. As the publication welcomes its incoming editor, Dr. Kristen Hutchinson, I can’t wait to watch as the text already laid grows in inclusivity, experimentation, and zest, as a safe haven in side of which to clothe or de-clothe the veils of present-day Western Canada. At Luma’s root, crucial ethical conversations happen between writer and editor, editor and editorial committee, publishers and advisory committee. As this circle of critical conversation widens, it can be where social facts are re-constructed, medicine is brewed, and where power can be re-assigned, even on an individual level. It is the gift of cool mud.

To all my fellow creatives and readers of Luma: thanks for the good times, films, exhibitions, and heart-to-hearts, and see you soon!