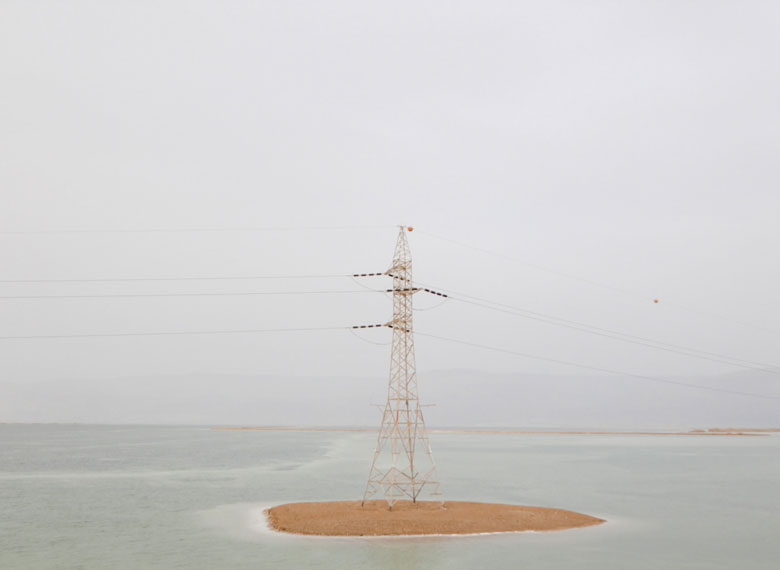 Dark clouds hovered over the city as I landed into Calgary. Between the airport and the houses where about half of the artists were staying during the Wreck City residency, it started to storm. I looked over my shoulder to the Bow River. Sky, road, rock, and water blended into the same greyness. It had been three years since I had moved away, and I had been daydreaming about the paths along the river. Invited back by Wreck City as writer-in-residence, I was looking forward to visiting the river once again. I had underestimated the blissful quiet of the paved riverbanks.

Wreck City is a collective of artists and curators who organize public exhibitions in unconventional sites including pre-demolition houses, abandoned buildings, and vacant commercial spaces (https://www.wreckcity.ca/residency). This year, the collective hosted their first residency, inviting a group of 21 local, national, and international artists to produce an exhibition over five weeks. A few months before the residency, I heard that Toronto-based filmmaker Polina Teif would be joining the group, tasked with documenting the residency on film. We exchanged emails and she shared her 2018 film Eulogy for the Dead Sea, a 24-minute environmental documentary capturing the drought of the Dead Sea. During our many conversations, I learned that this film began as a series of photographs of abandoned and decrepit buildings in Palestine, Jordan, and the West Bank of Israel and developed into a documentary on the societal and environmental impact of the Dead Sea’s recession on the surrounding area.

In anticipation of our first meeting, Polina’s film had been on my mind. As I passed the Bow River by taxi that first day in Calgary, I was reminded of her images of the drying Dead Sea: banks deprived of water by human-made dams that divert the Jordan River’s flow away from the lake while the rising temperatures evaporate what little water is left. The salt of the Dead Sea is abundant and healing, forming briny icicles that encrust the receding shoreline. From the Dead Sea basin, materials such as salt, mud, and potash are extracted and packaged into commercial products marketed as medicinal, purifying, and revitalizing.

The Dead Sea simultaneously aspires life and forbodes its own death. It is a body of water denser with meaning than my nostalgic memories of the Bow River.

Water is a potent symbol of time and transformation. The flow of the river had changed since I last saw it, and it is endlessly renewing. The water in the Dead Sea has different qualities: its mineral-rich salt promotes youthfulness and vitality, and the lake remains a symbol of religious reverence and spiritual purification. Yet, the slow decline of the water’s depth—blamed in part on the evaporation ponds used for harvesting mineral—and the mysterious, dangerous sinkholes that collapse around the lake have made it difficult for farmers to upkeep their land. The Dead Sea simultaneously aspires life and forbodes its own death. It is a body of water denser with meaning than my nostalgic memories of the Bow River.

In Eulogy for the Dead Sea, Polina’s lens follows the falling of the sun and the rolling saline lake from the sky. Text across the bottom of the screen translates the state of the sea and its impact on the local farming industry. Polina returned to the Dead Sea region three times from 2016 to 2018 to collect photographs and footage for Eulogy, and to interview farmers and locals of the area. The film is narrated by the voices of those directly affected by the sinkholes: a water engineer, a local park ranger, and a former factory worker of Dead Sea Works, a mineral extraction enterprise accused of accelerating the evaporation of the Dead Sea. 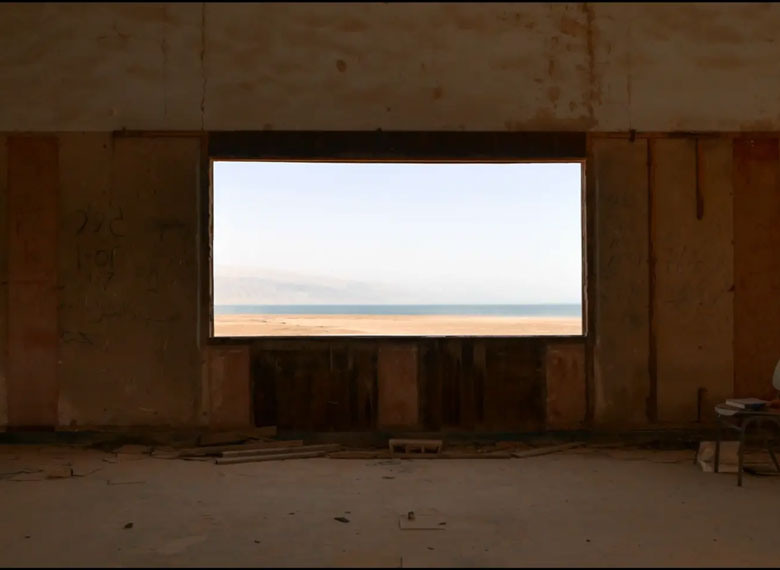 Between voice-overs, a soundtrack of solemn string instruments creates tension, a tightening, until eventual silence; an exhale. Polina uses the camera’s perspective to move us through a broken landscape—dry, deteriorating, and sunken—entangling the fragile present with remnants of the past. Her footage captures the ghostly remains of economic depression; crumbling abandoned structures surround the area. Farmers are forced to leave their lands as large sinking craters devastate the earth, a consequence of the dying lake. With the slow movement of the camera flying overhead by drone, the passage of time is accentuated as the water dries and replenishes.

When I arrived at Wreck City, I ducked out of the rain through the back door of Polina’s residence. A few pairs of shoes lined up at the entrance was a reminder of the many artists living there. The living room was converted into an art studio; the backyard, a community garden. Sitting at the kitchen table, Polina and I talked about her plans for documenting the Wreck City residency; how she had moved from Israel to Canada ten years ago, and returned to Israel for a residency in Arad in 2016. She talked about how her practice evolved from visual studies at the University of Toronto to creating documentary films; how carrying a small camera—just like the Lumix GH5 Polina is using for the residency—made her appear more discreet and approachable on her travels, allowing her to enter areas that might otherwise be restricted.

"Art is always yelling into a void, but sometimes you get a response back,” she tells me. “Helping artists see their work echoed back to them through my eyes is a great feeling.”

Over the years Eulogy has evolved, shifting mode and method, from conceptual to informational, reflecting Polina’s experiences at residencies and attending graduate school in Film Production at York University. In 2017, an earlier adaptation of the film (then titled Eulogy for a Dying Sea) was exhibited at Xpace in Toronto, this time featuring dancer James Bailey, whom she had met in Tel Aviv. Polina invited the dancer to interpret the Greek mythology of Atlas, based on a painting of the Titan found in an abandoned school in Israel.1As a multidisciplinary artist, Polina has worked collaboratively as a former member of the xxxx collective, a multidisciplinary artist collective based in Toronto.

In contrast, in her filmmaking, she performs many of the production roles herself. “I was asking, what does a producer do? And they told me, well the producer kind of makes everything happen,” she laughed. “So I guess I do that—I guess I’m the producer, too. I’m shooting, I’m learning all of these things. It didn’t occur to me to delegate.” For most of the making of Eulogy for the Dead Sea, Polina travelled alone with just her compact camera, a Lumix LX100. Polina has now expanded Eulogy to include a growing number of team members as more industry contacts come forward to offer their expertise. With Eulogy prepared for touring the festival circuit in 2019, Polina is creating new films, including the documentary of her Wreck City residency experience to be released in fall 2018. 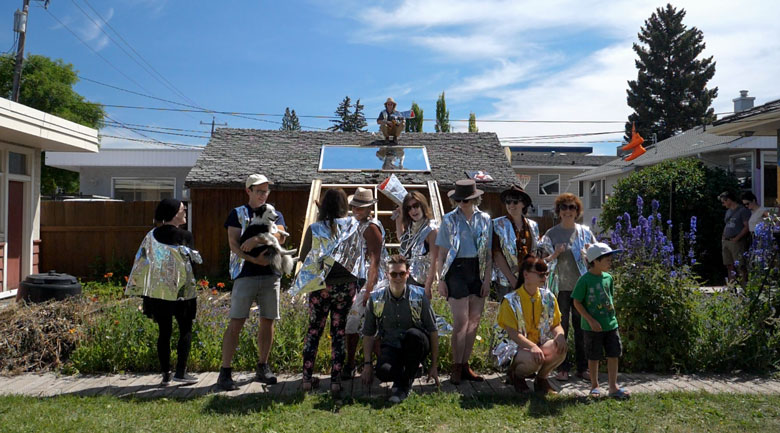 After a three-year long project like Eulogy, the playfulness and camaraderie of Wreck City allowed Polina to explore the documentary format with a lighter hand and a shorter time frame. In Calgary, she was surrounded by other artists who are the subjects of her film, diligently creating projects for the Wreck City exhibition. The exhibition, which opened in late July 2018 and marked the end of the residency, turned empty office buildings, storefronts, and restaurants into temporary and immersive public artworks. Polina welcomed the pacing of this new project: “I’ve been lucky with this group of people, that they’ve allowed me such an intimate view—it’s nice to see people’s hands working. Art is always yelling into a void, but sometimes you get a response back,” she tells me. “Helping artists see their work echoed back to them through my eyes is a great feeling.” In our shared taxi on opening night of the Wreck City exhibition, I saw her take out her camera from the backseat of the car, filming through the window as we drove past the Bow River.

Although there are some thematic similarities,—abandoned buildings, places in transition—the energy of the two projects couldn’t be further from one another. Where Eulogy documents the desolate stillness and deterioration of the area around the Dead Sea, Polina’s Wreck City documentary engages with the infectious creativity that extends through not only the domestic residences where the artists are living but Calgary’s entire inner-city, capturing an insider’s look at the making-of Wreck City. Polina spent six weeks filming artists in their make-shift studios, recording public events hosted by the residency, and documenting the public’s interaction with the experimental exhibition. 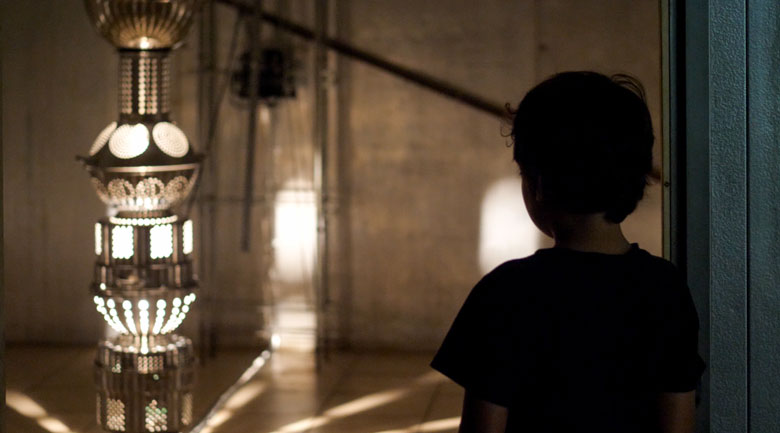 Among the eccentric programming, artist collective WYRDOS dressed as Charlie Chaplin, performing silent comedy acts through the glass of a vacant radio recording booth inside one of the exhibition’s uptown venues; Teresa Tam served tea in her temporary Hong Kong style café on the ground floor of a downtown high-rise; and artist couple Chris Foster and Layne Hinton built a kinetic light installation in the grungy basement kitchen of Calgary’s historic Devenish Building. I stood next to Polina as she filmed Catron Booker’s moving performance RISE UP! RISE UP!/The Company Had EVERY Way of Knowing. For her performance, Catron, who joined the residency from Oaxaca, Mexico, handed out single stems of red roses in the names of environmental defenders, many of whom are from communities that have faced significant impact by large-scale energy and mineral extractions.

On my last day with her, I saw Polina from a distance at a public event held in the garden of the residence, where she hovered by the fence with her camera. The residency was hosting a live music show by Baby Cages, a Toronto-based pop band passing through Calgary on their national tour. The musicians are also featured on Polina’s Wreck City film soundtrack, along with original music by residency artists Zain Alam—who contributed the same composition to a collaborative installation with artist David Hoffos for the exhibition—and Sarah Houle, member of local Calgary band Ghostkeeper. It was a hot day and the audience laid out on the grass for one of the last events with the inaugural residency’s cohort. Polina filmed along the outskirts of the scene until it was time for me to leave. I took a taxi back to the airport, passing by the river one last time.

The Wreck City documentary is slated to be released in December 2018. For more information on Teif's work, go to: http://www.polinateif.com/