Fascinated and Repelled: an Interview with Lorenzo Fusi 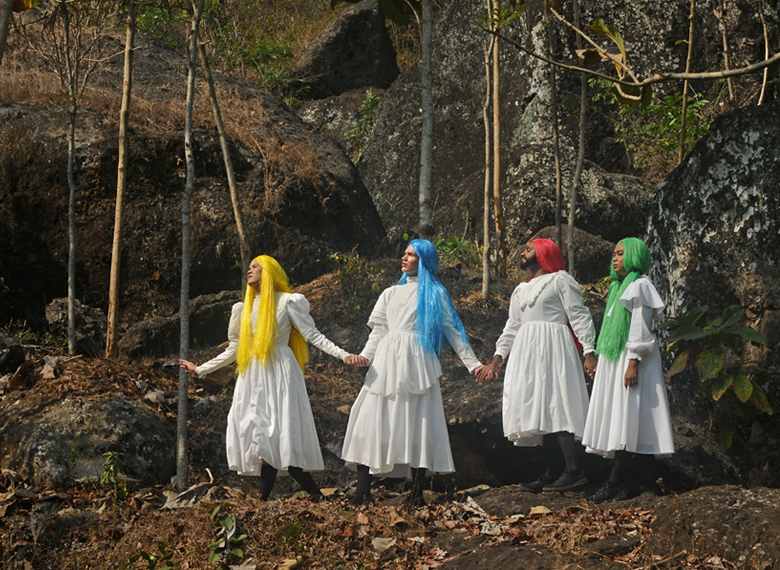 Having recently renewed his position as Visiting Curator at the Illingworth Kerr Gallery (IKG) in Calgary, Lorenzo Fusi—characteristic of his curatorial practice—continues to bring institutions and artists together, working toward a more diverse and collaborative dialogue between bodies. Having previously curated for the Liverpool Biennale, the Palazzo delle Papesse, sms contemporanea, and Open Eye Gallery, curating artists such as Gordon Matta-Clark, Christian Boltanski, and Anya Gallacio, Fusi’s perspective on Calgary’s international role has already had a marked effect on the city’s culture.1

Recently, Fusi moderated a panel discussion presented in conjunction with the University of Calgary (U of C) to consult possible exchanges between the study of textiles and contemporary art. In the context of the current paralleling exhibitions at the Nickle Galleries and the IKG, he also gave a talk titled “Art Now” at the U of C. Under Fusi’s direction, the IKG has partnered with the City of Calgary to foster discussions about Public Art, collaborating to bring artists such as Tania Brughera, Alfredo Jaar, and Jeanne van Heeswijk (giving a public lecture at the Alberta College of Art and Design February 23) into the city to conduct workshops and lectures in the community.

Lorenzo and I corresponded over email about the motivations behind his projects, Canadian landscape anxiety, and possessing an outside perspective. 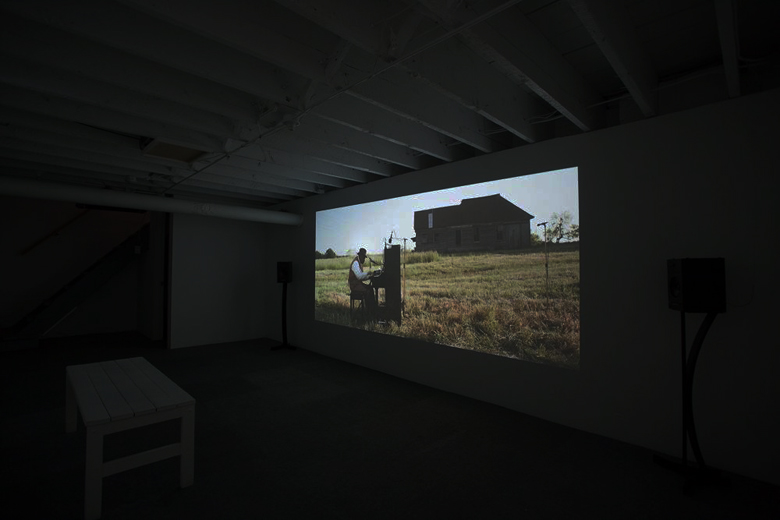 SARAH TODD: Performing the Landscape was one of the first projects you launched almost as soon as you arrived in Calgary as Visiting Academic Curator of IKG. Your first project was a live performance art event. What motivated you to pursue performance-based projects in the context of IKG and Calgary?

LORENZO FUSI: We are talking about two very different projects and approaches. IKG LIVE is a micro-festival dedicated to live art and performance that is presented inside our gallery spaces. The only condition we pose to the participants is for the gallery to remain neutral so that the space can be interchangeable. It is performance art in the context of a white cube. Time-based interventions that activate an otherwise empty exhibition space. Empty but not neutral, mind you, as a public gallery has very specific connotations: it is in itself a power structure and a heavily institutionalised space. It is a way to offer a proper stage to a discipline that often lives at the margins in the programming of visual art institutions. It is not designed as a competition. We make a selection because we cannot accommodate all the proposals. Besides, not all the submissions we receive match the requisites. However, we offer a small development grant in recognition of the potentials or accomplishment of one proposition.

Performing the Landscape, conversely, is a group show that looks at the performativity of and in the landscape within the context of the moving image. To me it is more an investigation into how landscape as a genre is redefining itself and how categories such as the sublime have been overwritten within a post-modern perspective. One project is about performance whilst the other, if anything, looks at ideas of performativity through the lens of the moving image.

To me the medium that is presently reconfiguring and challenging the landscape tradition in the most exciting and convincing way is the moving image.

ST: Can you speak to your research methodology for Performing the Landscape? It is a really ambitious multi-site exhibition to pull off in a very short timeframe. The epic diversity of the artists is notable—both local and international, and many works that have not been exhibited in Canada before. What in this project demanded this kind of scope and scale?

LF: When I first arrived in Calgary, I was overwhelmed by the presence of landscape painting and photography in the city: it is everywhere. As a newcomer, I could not help being somehow fascinated and repelled by it. It was like being immersed in an enduring tradition, frozen in time, centred on clichés and conventional tropes such as the sublime, nature, wilderness, etc. I immediately knew that I wanted to do something around it, if only as a way for me to connect with the territory, its material culture and artistic legacy. To me the medium that is presently reconfiguring and challenging the landscape tradition in the most exciting and convincing way is the moving image. Although this tradition is particularly strong in Canada (particularly in Alberta) it is not unique to the region. I therefore started thinking about video and filmic work produced over the last ten years and from all around the world that could speak to the theme of the show and realised that there were several communalities among specific works by artists who have otherwise a very diverse practice. I work with artists, not with local artists or international; I just work with artists, whose work can speak locally and resonate globally. In a sense the more diverse their practice and background, the more convincing the argument proposed by the show. The exhibition could have been way bigger, if only I had more time and resources. And to present video and filmic work in an ideal condition one needs space: a lot of space. Besides, the show aimed at duplicating this idea of the pervasiveness of the landscape tradition in Calgary by presenting works in diverse contexts and types of exhibition spaces. I also wanted to collaborate with like-minded institutions from the outset and this show seemed to offer an opportunity to do so.

LF: In recent years, we have been looking at different ideas of performativity, including that of the viewer in relation to an artwork. With this show, more than performance as such, I am interested in exploring the hierarchy nestling in the natural order of things and challenge it. For example, the assumption that once you position a performer in front of a landscape, the latter automatically becomes a secondary element: the backdrop of the action. The works that I selected for this exhibition tend to do the opposite: the landscape refuses to simply recede in the background and in fact becomes a performative agent, one that has often a stronger presence than that of the performer. Every element in these works is relational, including the camera. And as such they all these actors/agents perform with and for each other. 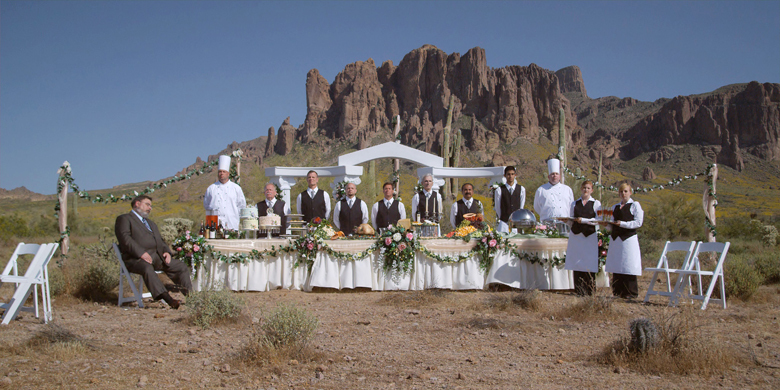 ST: It’s a generalization, but I think that Canada has this kind of double-edged insecurity in relation to nature and art; on one hand, Canadians are kind of smug about the natural beauty of this place, but it also becomes quite oppressive (this is evident in how we talk about the weather constantly!). The popularity of Canadian landscape painting by the Group of Seven, Emily Carr and the like, has led to this kind of self-depreciating idea that Canada has more nature than culture, that landscape is a kind of cliché in art and culture. As someone new to Canada, did you pick up on any of this kind of anxiety? Did you feel like a new perspective could be brought to well-worn Canadian territory?

LF: Each one artistic community suffers of some complex or anxiety relating to their history and past. In Italy for example, contemporary artists are haunted by the country’s glorious artistic legacy and often struggle in coming to terms with this history to the point of paralysis. Everything they do today will never be ‘good enough’ or compete with what has been already done in the past. Coming from an European perspective, indeed Canada seemed to have more nature than culture. I now think that Canada has many forms of culture and knowledge that are ingrained in nature. There are however some worrying indicators suggesting that culture (and the visual arts specifically) are not so important in our society. For example, the very reduced space offered by the media to art news and their and lack of serious analysis.

The landscape is political space and construct, which is daily shaped by our experiences as well as the news. We charge it with meaning by simply looking at it from our singular perspectives

ST: The traditional concept of ‘a landscape’ in an artistic sense is that it is beautiful. For example, the Canadian landscape has been so deeply and totally aestheticized historically through paintings and images used in nation-building, often which belie the fact that the landscape is actually a site that is contested, complex, the site of trauma. That said, much of the work in [Performing the Landscape] is pretty empirically beautiful—how are artists navigating/manipulating the trope of the beautiful landscape?

LF: The show plays with ideas of beauty and references directly the tradition of the aestheticized landscape you mention. It was intentionally conceived as a non-confrontational experience, disengaged almost at first glance. Some works have underlining political connotations. In all there is a tension, even in those that are not explicitly addressing a socio-political issue. I consciously avoided in this instance any work that was literal in conveying the artist’s intentions and political viewpoint or characterized by a documentary approach. I believe it is the viewer to bring the politics into these works. The landscape is political space and construct, which is daily shaped by our experiences as well as the news. We charge it with meaning by simply looking at it from our singular perspectives. Trauma, contestation, and war are part of it.

Performing the Landscape was presented by the Illingworth Kerr Gallery (IKG) and Alberta College of Art + Design with five local galleries to revisit the art of landscape through the lens of the moving image. Challenging tradition, the work of 13 international artists was presented at the IKG, Contemporary Calgary, Glenbow, Stride Gallery and TRUCK Contemporary Art from September 22 to November 12, 2016.