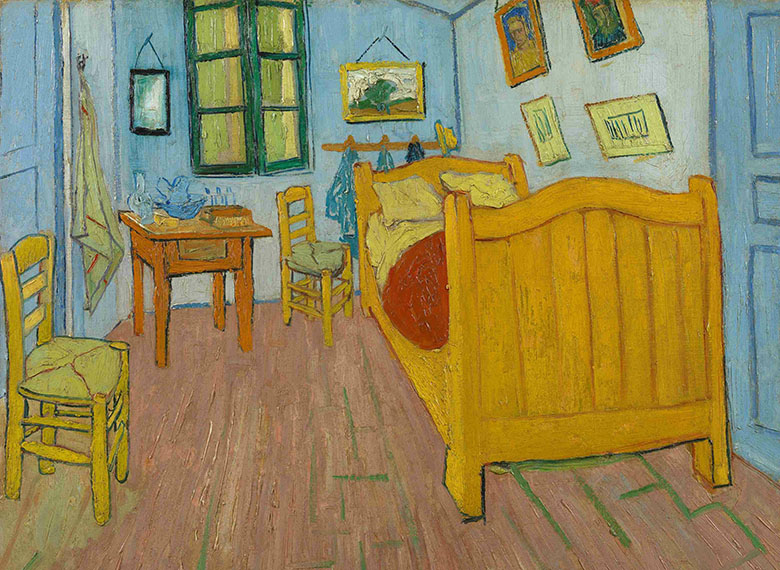 Whenever I sit on a bus or train, in a theatre, or in a restaurant or a café, and my back is not against a wall, somewhere in my mind I am afraid that someone is going to slit my throat.

My family rented Spy Game (2001) from Blockbuster and took it back to our shitty townhouse at 5636 Pensacola Crescent, Calgary. I watched the whole film while smelling a bar of vanilla soap we got in a food hamper. Robert Redford says to Brad Pitt in spy-training: always sit in the corner of the room, so you can observe without exposing your back. But I think to myself that if that rule was taken seriously by all spies, it would be too easy to spot a spy. I mean, in any regular rectangular room, a spy could be sitting in only one of four places. Chances of finding them would be pretty hiked.

My parents’ families rarely visited, I imagine because they were afraid of our neighbourhood, and disgusted by our small, orange-carpeted, powder-pink-walled house, and because kids would steal the caps off the tires of their vehicles. The cigarette burns on the ceiling of our own baby-blue Monte Carlo marked each time it had been hotwired, but thankfully we never had enough gas in it for it to get too far. We found a lot of dead bats on the windshield of that car in the mornings. Still don’t know why.

There were lots of strange phenomena like that. All of our flowers would be neatly clipped off every Mother's Day, syringes would appear on our lawn. We would leave our light on at night, so people could come for help if they needed, mostly hookers, and my mom would make tea for them in the kitchen, and they would talk until morning. I loved my childhood, and this unshakeable belief that we would make it through on powdered milk and Cream of Wheat.

The real artist, who knew what he was imitating, would be interested in realities and not in imitations; and would desire to leave as memorials of himself works many and fair; and, instead of being the author of encomiums, he would prefer to be the theme of them.1

In critical dialogue, we are pursuing the first bed, the original idea, the truth, reason. In articulating stories from my childhood, I hope to recreate them as a vision in front of me, I hope to understand what the hell happened. As a film and media art publication, we too attempt to pursue the truth about our humanity, the essence of our present socioeconomic and cultural climate, all by way of the same process: staring at the third bed. But can any conclusions drawn from studying the third bed, the skewed mirage, be trusted? We are lead to ask: what role does art and poetry have, as something twice removed from reality? And what role does a magazine have that divines from the twice-removed image: media art and film?

The essays in Issue 004 of Luma ponder mimesis, and the illusory and colonial nature of re-enactment. There is a division between reality and the re-enactment of reality, a magnification brought on by personal affect. Bryn Evans quotes cultural theorist Theodore Adorno in his review of Kiju Yoshida’s “political trilogy,” saying: “The splinter in your eye is the best magnifying glass.” The re-enactment of reality through art—the third bed—is the picture of reality from an individual’s perspective, like Van Gogh’s singular, skewed perspective in Bedroom in Arles. What I write down from my memory, as accurate as I try to be, will never be quite what happened.

I mean, in any regular rectangular room, a spy could be sitting in only one of four places.

Art is an illusory space within which one can magnify elements of an idea for examination. It is a testing space, where non-real things can be considered real for just a moment, or vice versa. Ideally,  it can provide a venue for testing methods of revolution before they are put into action. Adorno introduced mimesis as a term with which to identify art as the embodiment of non-repressive, non-violent reason. While Yoshida’s films themselves do not exist as physical bloody acts, they do—as Adorno suggests—re-enact chaotic, violent, physical revolution, what Evans describes as “an all-consuming faith,” but inside of a space—film—held at arm’s length.

Rita McKeough’s recent exhibition, described by Areum Kim, aligns even more acutely with Adorno, calling for forms of revolution driven by “empathy, collectivity, community, and solidarity with all forms of life.” McKeough’s installation of squirming wooden snakes, automated drums, and animal projections serves as a mimetic re-enactment of our current socio-political and environmental climate. This call to action however, like Yoshida’s films, is not a direct action in itself. It remains yet a call, a pre-action.

Plato’s best pupil, Aristotle, asserted that art is made to be connected with.2 That connection is based off of empathy. You have to be able to see yourself in the art, or it won’t affect you. Guillaume Carlier, in his video essay, explores the horror genre as a balancing act between belief and the suspension of belief; reality you can connect with and irreality you can’t. Film is often a magnifying glass to the spiritual experience, another kind of revolutionary “all-consuming faith.” It’s a ritual that simultaneously lifts the viewer out of their seat and grounds them down using the tropes of the genre itself.

Christening the audience as “supplicants in the pews,” Dan Olson in his video focuses on the contexts within which we watch film, and the diversely coloured glasses we wear to festivals or quarter-of-a-billion-dollar blockbusters. Equally criticizing the spiritual failing of Batman v Superman (2016) and the marketable illusion of the “underground,” Dan acknowledges that “all creators are beholden to the realities of process and the pragmatics of finding an audience.” The capitalist pressure to appease an audience or even an editor is real. Where do you draw the line, sacrifice communal affect?

Investigating connection and the most intimate of settings, Mary Arnatt writes on Mary Graham’s massive research project titled “First Nations Involvement in Alberta’s Film Industry: An Oral History of the Importance of Stoney Nakoda Influences in the Last Century.” This project, based on a series of screenings hosted on the Stoney Nakoda reserve, was launched in an effort to splinter the mimetic gross fictionalization of Indigenous peoples in Alberta’s film history. Family-members, friends, and elders gather at the screenings to identify the names and faces of never-before recorded Indigenous actors, crew members, stuntmen, extras, etc., as well as horses, riverbends and geographic landmarks. They pay respect to previously unrecognized Indigenous culture-makers and highly skilled professionals, seeking to divide real history from perceived history, real culture from manufactured culture, the wantonly magnified.

I write down stories from my childhood, prose. I caricaturize my own history, limit it, exaggerate parts of it for the sake of affect, play to my own emotions, my tiny perspective. Critical theorist Homi Bhabha writes:

The ambivalence of colonial authority repeatedly turns from mimicry—a difference that is almost nothing but not quite—to menace—a difference that is almost total but not quite. And in that other scene of colonial power, where history turns to farce and presence to 'a part' can be seen the twin figures of narcissism and paranoia that repeat furiously, uncontrollably.3

Even in art writing, this solipsist fad of reviewing art from a personal perspective—a kind of jacking–off, where the writer talks more about themselves than the actual art, like I have done above—focuses on connecting with the reader, writer-to-reader, but emotionally obstructs the connection between the reader and the art itself in the process. At the end of an article, the reader’s not sure if they understand the art more thoroughly, or just the humanity of the writer, Narcissus. In this same way, art at times obstructs rather than deconstructs the truth for us. It projects an unreal image of reality, laced with the personhood of the maker, every bit as flawed as each person or cultural climate is. Criticism, research, and study are our tools for survival against this inception—tools to hunt down and supersede the twin figures of narcissism and paranoia, the root of the colonial spirit, fictionally founded fears of being throat-slit.