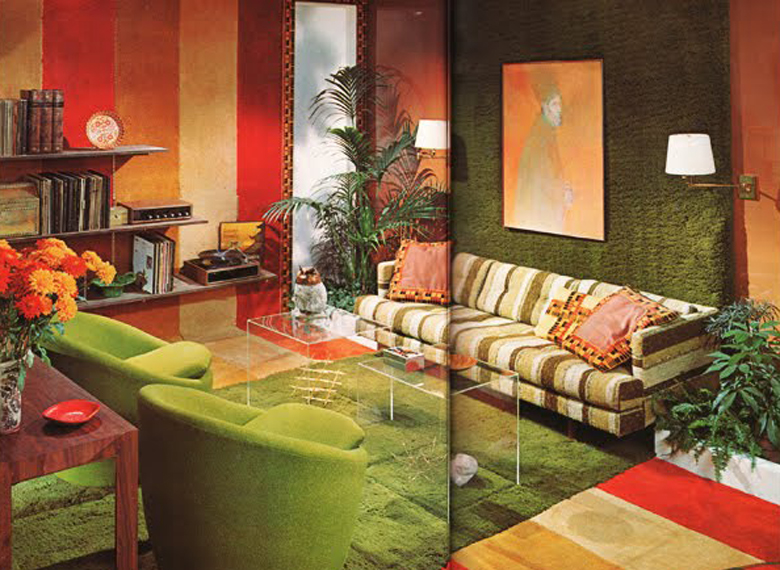 Ceiling to Ceiling Carpeting. Scan from 1001 Decorating Ideas, 1970. Accessed Feb 8, 2017. "Apparently this basement room is great for listening to music, as the carpeting localizes sound by cutting down on echoes!"

Kapwani Kiwanga, in her 2-channel sound installation 500 ft at Esker Foundation—part of her exhibition A wall is just a wall (and nothing more at all)—gives a 12-minute oral history of institutional design dating as far back as the time of Vitruvius. She quotes the writings of architects and theorists who have hypothesized ways to use the vibrations of perceptible radiant energy—institutional colours such as Warm White, Baker-Miller Pink, and French Grey—and the natural properties of the wind and sun to control and manipulate the behaviour of populations. She reads a gut-punching quote from Swiss-French architect and urban planner, Le Corbusier (1887-1965): “The white of whitewash is absolute, everything stands out from it and is recorded absolutely, black on white; it is honest and dependable. . . . It is the eye of truth.”2

Le Corbusier belonged to the school of thought of Viennese architect Adolf Loos (1870-1933), whose schtick was:

The lower the culture, the more apparent the ornament. Ornament is something that must be overcome. The Papuan and the criminal ornament their skin… But the bicycle and the steam engine are free of ornament. The march of civilization systematically liberates object after object from ornamentation.1

Mr. Loos has easily convinced me to not take part in civilization.

Issue 011 of Luma considers totalitarian vision, feelings of entrapment, and class disparity—even in the context of the directorial role. Poet Neil Surkan responds to A Primer (2017), a film by Kiwanga also in A wall is just a wall (and nothing more at all) at Esker. Considering Kiwanga’s film and photobiology in the context of Calgary, he observes a city built on the aesthetics of the oil industry—chaos, puce and pink, the isolation of nature—and a yearning for freedom beyond it: How can I make time out of toxins?

Mary Arnatt’s “Wiretapping Pakula’s Klute” walks us through the eerie 1971 thriller Klute, shot to implicate the camera as stalker, and as male gaze. Its horror is based on fears of surveillance, and unconscious manipulation—a horror that seeps into its victim in the form of anxiety and paranoia, striking a chord with the symptoms of contemporary Internet-enmeshed life.

Felicia Glatz chronicles the Artifact Small Format Film Festival’s recent re-naming, and its collaborative, non-binary goals to open celluloid up to individuals of every class, culture, and artistic background. She points to the festival’s all-male inaugural screening in 1992 as a call to inclusive action.

Gillian McKercher, a local filmmaker in the process of making her first feature, works to empower other women in the field of filmmaking with post-patriarchal directing strategies. In an interview with Ted Stenson—the second of our three-part series on the making of Circle of Steel—she speaks about her Steven Soderbergh-influenced vision of the directorial role as a collaboration. She makes note of the complex levels of collaboration and individual creativity necessary to make a film come together.

Luma also collaborated with Vancouver-based publication, Decoy Magazine, to co-publish the exhibition essay for The Channelers, an exhibition of .gifs and digital videos examining Hito Steyerl’s “poor image” in present-day digital media. It considers digital images—supposedly freed from capitalist hi-tech minimalism and therefore enabled to perform institutional critique—as paradoxically paralyzed by the practical problem of performing unpaid and invisible labour. It discusses the balance between challenging institutional capitalist patterns of value, and re-designating value systems that allow artists to live.

As you read this issue, think about your own micro-community. Think of ways you can re-designate value contrary to the history of institutionally defined aesthetics, capital, and power. Maybe this could mean ornamenting your apartment, reconsidering minimal mid-Century aesthetic trends... carpeting your entire living room.