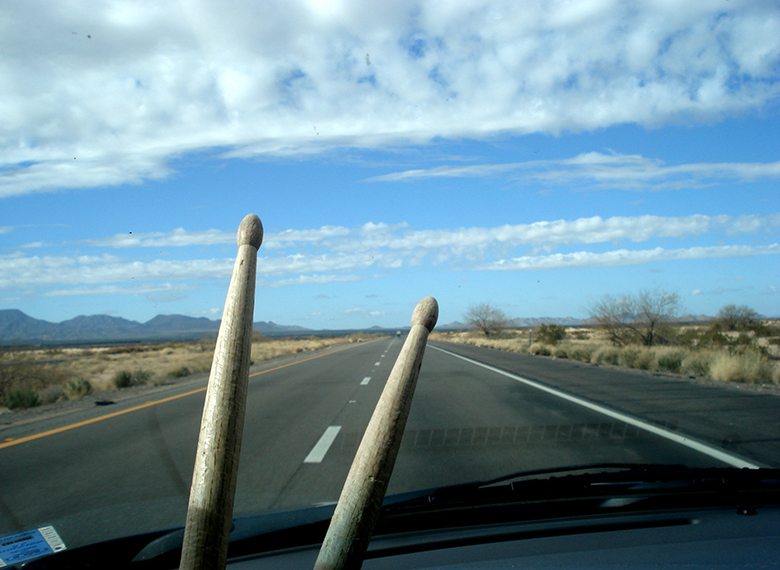 There is a point in a journey where a person doesn’t know where they are going. Lisa Lipton, multi-disciplinary artist and recent Sobey Award nominee from Halifax, is soon to conclude a gesamtkunstwerk: her chaotic feature-length docu-fiction, THE IMPOSSIBLE BLUE ROSE. A mammoth interweaving of performance, film, and installation, the work captures the journey of Frankie, Lipton's alter ego, as they travel together through North America from 2012 to 2015, making stops in Florida, Los Angeles, Death Valley, Iowa, Vancouver, Windsor, Middle Sackville, Halifax, Winnipeg, and Woody Point before concluding in Hawaii. In June of 2015, Lipton even staged a unique re-enactment of THE IMPOSSIBLE BLUE ROSE in Calgary, plucking out characters and scenes from the docu-fiction to make the multi-venue performance titled Signed, Your Secret Loving Admirer, and performed during the Sled Island Music and Arts Festival. With her cross-continental journey now over, and post-production for THE IMPOSSIBLE BLUE ROSE nearly complete, Lipton has returned to Calgary. I met up with her to discuss her work and upcoming February 19th performance at EMMEDIA’s PARTICLE + WAVE 2.5.

Lipton is the first to tell you that, “Not knowing what will happen is the scariest thing of all.” When initially embarking on this project, Lipton had planned to migrate south for the winter like a snowbird to paradise, to work with an idol of hers, Zach Hill—visual artist and virtuoso drummer most famously known for Death Grips and Hella. However, as circuitous journeys usually go, the things she wanted to happen didn’t; and her initial intuitions ended up being beside the point altogether. After touring the States, Lipton wound up in residence at Art Share L.A., in need of a place to finally stop and recognize where she was waking up in the morning. It was a time where she could let go of her self-imposed boundaries, relinquish control, and reflect. Using a jam space in L.A. Bedrock Studios, a room 95, Lipton sought respite through drumming. Though she never met Hill, she began to perform his songs in Room 95, her obsession to ascend to his level of mastery manifesting as the first chapter of THE IMPOSSIBLE BLUE ROSE, rightfully named ROOM 95.

Lipton's collaborative process of making, rooted in travel, is an exercise in fearlessness. Often taking on the role of the conductor, she welcomes her performers to bring their own set of experiences along with them, channelling and personifying the chaos of Lipton’s own journey. Managing a process that relies on an unyielding search into the unknown, concentrated emotion, and personal engagement with varying communities, Lipton must face chaos. As Lipton states, “I am interested in the idea of trying to control something that is uncontrollable, especially in the presence of other people. Subjecting myself and others to an overload of information that comes at you in different forms, through different technologies.  In terms of performance, this information can channel and personify other aspects of chaos. It's a new way of reading that energy when it’s derived from a human body.” Lipton’s narratives, the organization of inner chaos, often run parallel to life, but their peaks and valleys are magnified. By embracing the chaos of experience, Lipton is able to conjure exaggerated representations of love, death, life, loss, grief, and ecstasy; and in these created hyperbolic emotional spaces, people can only linger for a short while before moving on. 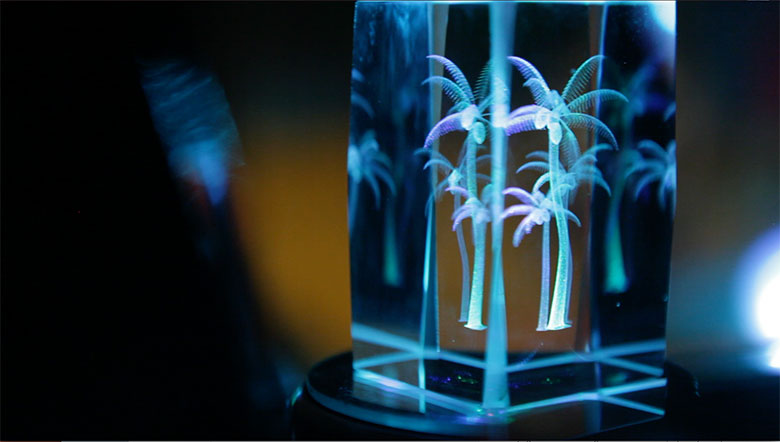 VIDEO Courtesy of the Artist.

Lipton works to give the viewer a brief glance into a world that is a little brighter, darker and stranger than the one we usually inhabit. In the beginning of Paradise City (2013), where a bartender offers Lipton a blue elixir along her travels from Vancouver to Windsor, Lipton claims that it “allows access to a realm where anything can happen, where the moon falls from the sky, and a constellation—Orion’s Belt (The Three Mothers)—finds its voice and lesson by way of song.”1 Like Persephone becoming bound to the underworld by consuming a pomegranate, Lipton becomes bound to her stories by consuming them, fact and fiction alike.  She gives directions to Paradise City, should you be searching for it: head from Vancouver to Windsor, seek blue drinks in martini glasses, fortune tellers, skate kids, graffiti, unearthly harmonies, find where the moon is hanging, and look to the Galaxy and brightly lit places hidden in the dark of night. Lipton composes a setting and scene, and welcomes you to insert yourself into it through the beautiful transaction of disbelief suspension that cinematic language encourages.

Both THE IMPOSSIBLE BLUE ROSE, and Signed, Your Loving Secret Admirer expose viewers to lingering hyperbolic emotional states that tend to invoke personal empathic responses. In LOVE LETTERS (2013), filmed in Fairfield, Iowa, a tacitly vile character dressed in black with his own name—Shit Mountain—bedazzled on his back, is tender toward one person—Kelly. He asks her if she would return his affections; the answer is no.  The familiarity of emotions present in the epic—such as Shit Mountain’s subsequent torment—transforms Lipton’s chaotic narratives into something strangely digestible. A deluge of tokens, symbols, and aesthetics serve as a means of entry into the world she has created; smiley faces, gauche fake nails, and the neon colour spectrum make up the vernacular of her work—disposable pawns in a rapidly consumptive visual culture. Packed into a familiar rom-com storyline, the audience engages in a familiar toil. Lipton’s expectation of viewer engagement, however, is more. She wants all of you. She will not only have you watch Shit Mountain’s steps, she will put you in his actual shoes. 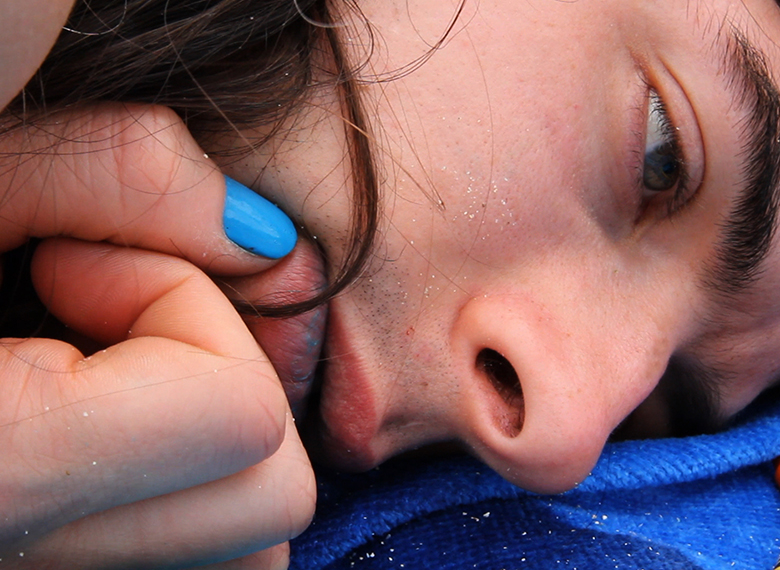 Nearly 40 members of Calgary’s community were approached to participate in Lipton's grand re-enactment of THE IMPOSSIBLE BLUE ROSE last June, solicited online and through word-of-mouth. The resulting performance, titled Signed, Your Loving Secret Admirer, took place at and between the dual venues of The Royal Canadian Legion and The New Gallery; fortune-tellers in pyramid hats foresaw, dancers in nude suits jumped, Lipton herself drummed, and a basketball scrimmage with a bedazzled b-ball interrupted pool games at the Legion. At The New Gallery, a tap dancer moodily paced the floor, a John Cusack-type brooded in one corner, and Shit Mountain himself, in all black, focused on writing Kelly in another corner. Familiar tokens from the docu-fictions were installed around the perimeter of the gallery, with chapters from the epic projected on one of the walls. Meanwhile, mothers with signs protesting the moon followed hooligan skaters back and forth between venues. By reinterpreting, re-enacting, and recreating THE IMPOSSIBLE BLUE ROSE, participants wilfully suspended disbelief alongside the chaos, each individual interpreting the work without the reduction of any of their emotions to simply the corporate or universal.

Throughout the creation of THE IMPOSSIBLE BLUE ROSE, Lipton would conceive of an episode by mixing both her own lived experience with fictional ones. Along her journey, she set about finding people from the local community who could fit into the work. As a result, Frankie is now embedded in communities all over North America. By connecting people to the work this way, people usually disconnected from “the art world” not only become the work but make it by living their own experience. The individuality of each participant’s experience is retained in THE IMPOSSIBLE BLUE ROSE, not reduced or transformed into didactic material. Every performance and screening of the work builds a new audience that can relate its specific locality.

With the epic nearly complete, Lipton's process, circuitous as it is, is ending back in Calgary at EMMEDIA Gallery & Production Society, where she is finalizing the sound of the last chapter, appropriately titled THE END (2015). As she puts the finishing touches on THE IMPOSSIBLE BLUE ROSE, she is also—true to form—wading into the unknown again, preparing a brand new project for EMMEDIA’s upcoming PARTICLE + WAVE 2.5 February 19th 2016. This darker and more intimate new experimental work will feature elements of drumming, audio, video and live performance on a smaller scale. Lipton’s pursuit of the unknown persists. She remains resolute, “I want people to understand that it is reckless to uproot yourself into dangerous territory, but that doesn't mean it shouldn't be done.”