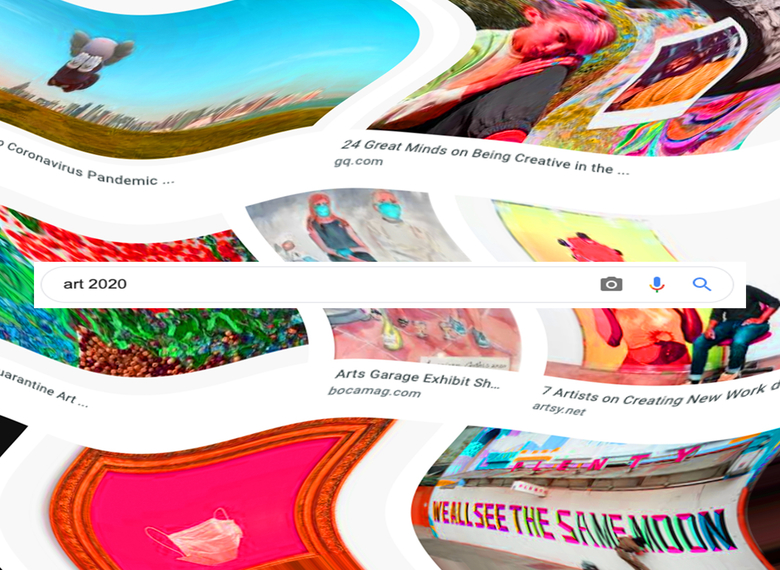 Imagine an algorithmic writing machine the size of planet Earth. Computers running through nocturnal hibernations spewing words into material, into spam, into emails sent in a diurnal rhythm. This unstoppable machine continues as steadfast as the planet’s rotation. In her article, “The Spam of the Earth: Withdrawal From Representation” (2012),Hito Steyrel imagines extraterrestrials discovering and relying on image spam to reconstruct a trace or history of humynity through the many images that enter the digital web.1

These images that desperately vie for humyn2attention also become a representation of humyn bodies and their production, underpinning the values of a status quo in this moment and time. If aliens were to reconstruct some semblance of humyn civilization through a possible digital rubble-scape, what would they deduce from these strange files that often represent pharmaceuticals, replica items, get-rich-quick services, plastic people, and contain undercover viruses? Steyrel posits, “what if image spam were actually a tool of ideological and affective indoctrination?”3

The word “SPAM” first appeared in the 1980s as a term and object used to bulk up conversations in MUD (multi-user dungeon) environments. A deliberate strategy designed to displace somebody or something by means of verbal repetition: users typed the word SPAM over and over as a means of scrolling others’ undesired text off-screens. This online intervention emerged to spatially push and make other words invisible from view; a tactic initially designed to annoy and silence. Today spam disguises itself as an image file but often contains commercial or fraudulent intent engulfing data connections worldwide. To sift through this swarm of messages and malicious content is to sift through, “...the pointless repetition of something worthless and annoying, over and over again, to extract a tiny spark of value lying dormant within inert audiences.”4Spam thus exists as both a phenomenon and metaphor for hyper-production, unremitting under any circumstances. This aggregate of information, that once consumed the value-driven resource of time, remains intent on working through lists of emails constantly churning material for the network space whether to be seen, or not. 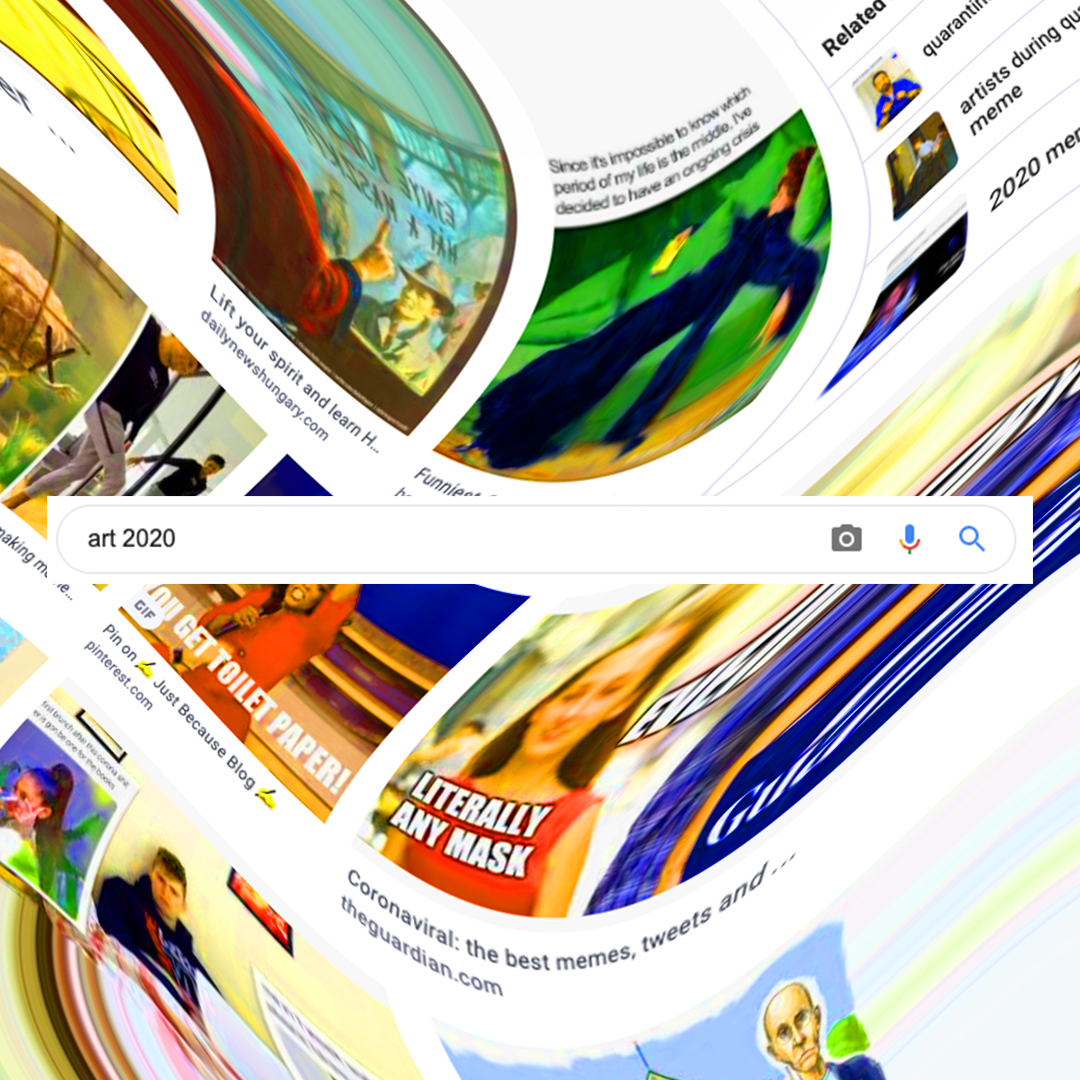 Currently, as we live through a pandemic with government mandated self-isolation, we are facing increasingly online and networked existences. So many interactions and behaviours that consisted of physical humyn contact have been adapted quickly to the omnipresent internet. Jonathan Beller’s notion that “To look is to labor,” has never been more relevant as our attention is both necessary and taxing, demanded by all things capitalist.5In a digital economy, spectators are turned into unpaid labourers and hyper-full-time workers as the gathering and organizing of attention produces value more than ever before. In response to this sudden and hyped up networked existence, the production of contemporary art ceases to be lethargic.

Though art online isn’t a new concept, the historic net.art origins are deeply rooted in the use of the internet’s qualities of immediacy and access. Net.art emerged in the mid 1990’s alongside the advent of the internet and particularly with a period encompassing static web pages and no user interface. Artists flocked to this new online space which presented itself as both an exciting and innovative site for artistic possibilities and experimentation. By the end of the century, artists had built email art, websites, software, and works that quickly blurred lines between art, design, communication, and political activism.6The immediate networking capacity allowed net.art artists to decentralize themselves from the physical institutionalized spaces of the gallery and work independent of an overseeing institution, while also working in networked communities.7

"Could it be possible that art at this time could also benefit from rest, recuperation, and critical reflection as humyns could?"

With the advent of the participatory web that introduced user-generated content, participatory culture and interoperability, much of this has changed the landscape of the web altogether for end users and artists alike. Additionally, much of the contemporary migration of physical art practices adapted to online in response to the quarantine circumstances, has little to do with advancing the legacy of net.art, but rather transmutates art designed for the white cube into a fleeting modification, conscious of its viral circumstances. This modification continues to reinforce the mechanisms of the art establishment, rather than an investigation of the internet’s virtual capacity as a critically examined exhibition space.

For instance, rather than viewing traditional mediums in the physical spaces they were designed for pre-pandemic, we are viewing pixelated images of three dimensional objects rendered into two dimension for makeshift online galleries and other social media platforms keen on gathering data to be digested by corporations and resold back to users. The material qualities of physical sculptures are translated into photographic virtual sculptures. Such an online migration reinforces a devout subservience to media monopolies and institutions alike as taste-makers, archivists, and autocratic gate-keepers; an industry with mechanisms fragile under “normal” circumstances. 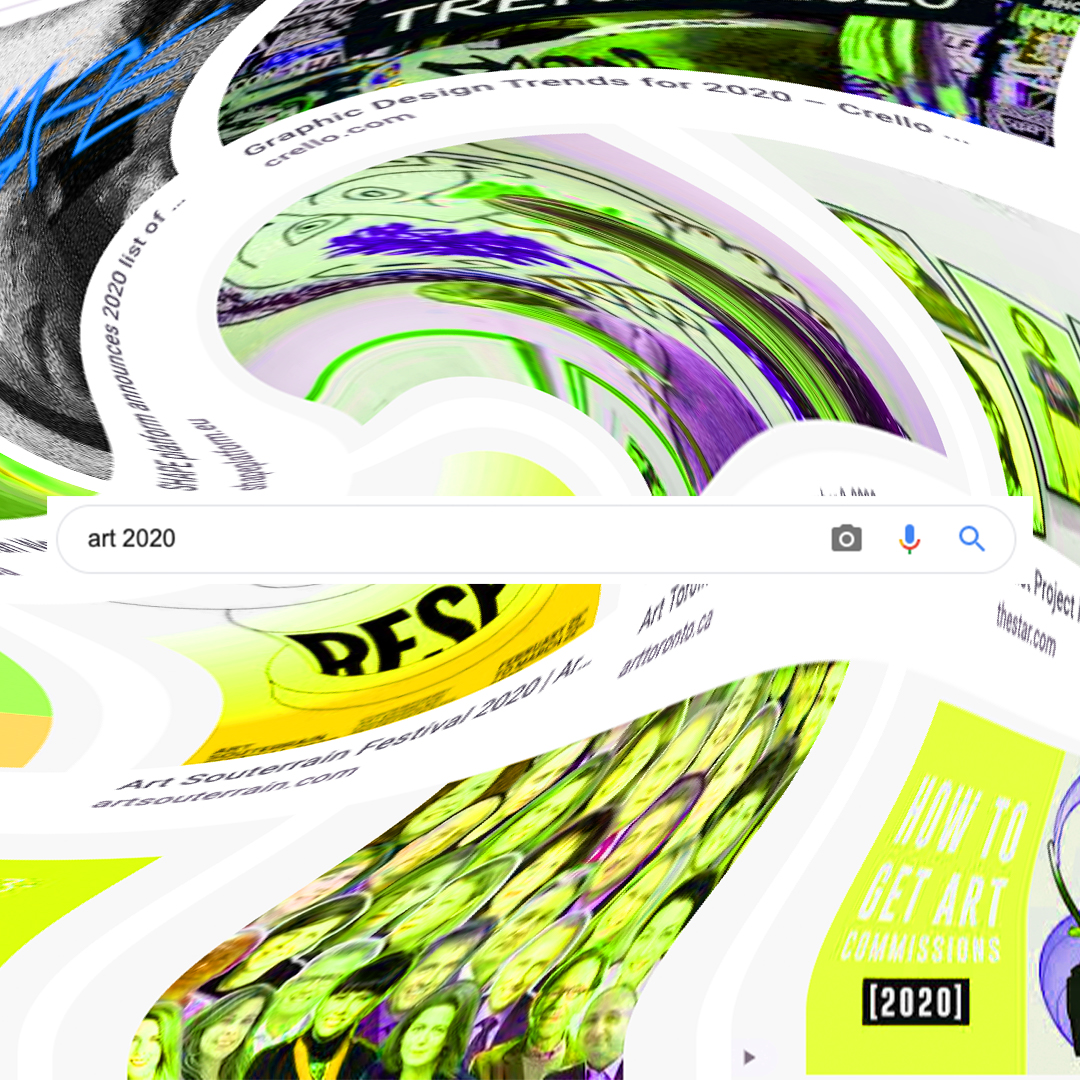 Yet, art institutions have fallen under more scrutiny in the context of the pandemic.8Though artists are expected to continue production for income and reputation, online art production has changed the access and ability for artists to create and disseminate. Could it be possible that art at this time could also benefit from rest, recuperation, and critical reflection as humyns could? Steyerl reminds us that in the instance of image spam, although referencing humyns, it is unsuccessful in accurately portraying humynity. If contemporary art production under a global pandemic persists like the unrelenting and intense nature of image spam, perhaps a widespread refusal and withdrawal of humyns altogether could be one of few answers. Or, art operating as spam is our future.

Networks are premised on, extrapolated from, and modeled on physical interactions. However, these interactions also include the ways communities face new forms of inequity particularly in the inconsistencies and disparities experienced with digital connectivity across the country.9The online environment offers little remedy for these asymmetries, compounded by the fragmentation of access to the internet and devices altogether.10Artists are expected to forge ahead with new work, apply for newly formed grants designed to accommodate pandemic circumstances, and opportunities adapting to the digital landscape, steadfast as a machine, mentally and physically able while maintaining a “business-as-usual” composure. But this new transition to online art viewing abandons the physical imperatives of works as they are experienced in person.

"Attention plays an insidious role in the digital economy of art"

More than ever before, artworks face new challenges, particularly those disinterested in approval from the status quo. Especially in an era of media monopolies capitalizing upon the aesthetic faculties and imaginary practices of viewers via navigation and cursor clicks. With a departure from the less regulated earlier days of the internet, now into a mediated and controlled space, this question is especially relevant in an era of resistive practices that are consistently undermined by hostile internet censorship policies intolerant to difference. Dissenting voices face strange challenges in a virtual environment that is invested in the preservation of a status quo.

Although the advantages of works circulating online by means of websites and social media platforms such as Instagram into an accelerated distribution of “digital” art are tantalizing, the difference of physical exhibitions and virtual ones are evident. One can’t help but be reminded of the nature of spam, drawing source and inspiration from a virtual world spewing content like an unending deluge, each intensely and competitively seeking attention. Similar advances are hyper visible in the art industry. Some institutionalized art spaces have embraced the virtual dimension quickly, adapting their models to forms of digital dissemination of art; digital galleries take on a trend-like popularity. Attention plays an insidious role in the digital economy of art, and the equity asymmetries of those who can most benefit from online circumstances are determined by those who can afford or be able to adapt, and those who cannot. 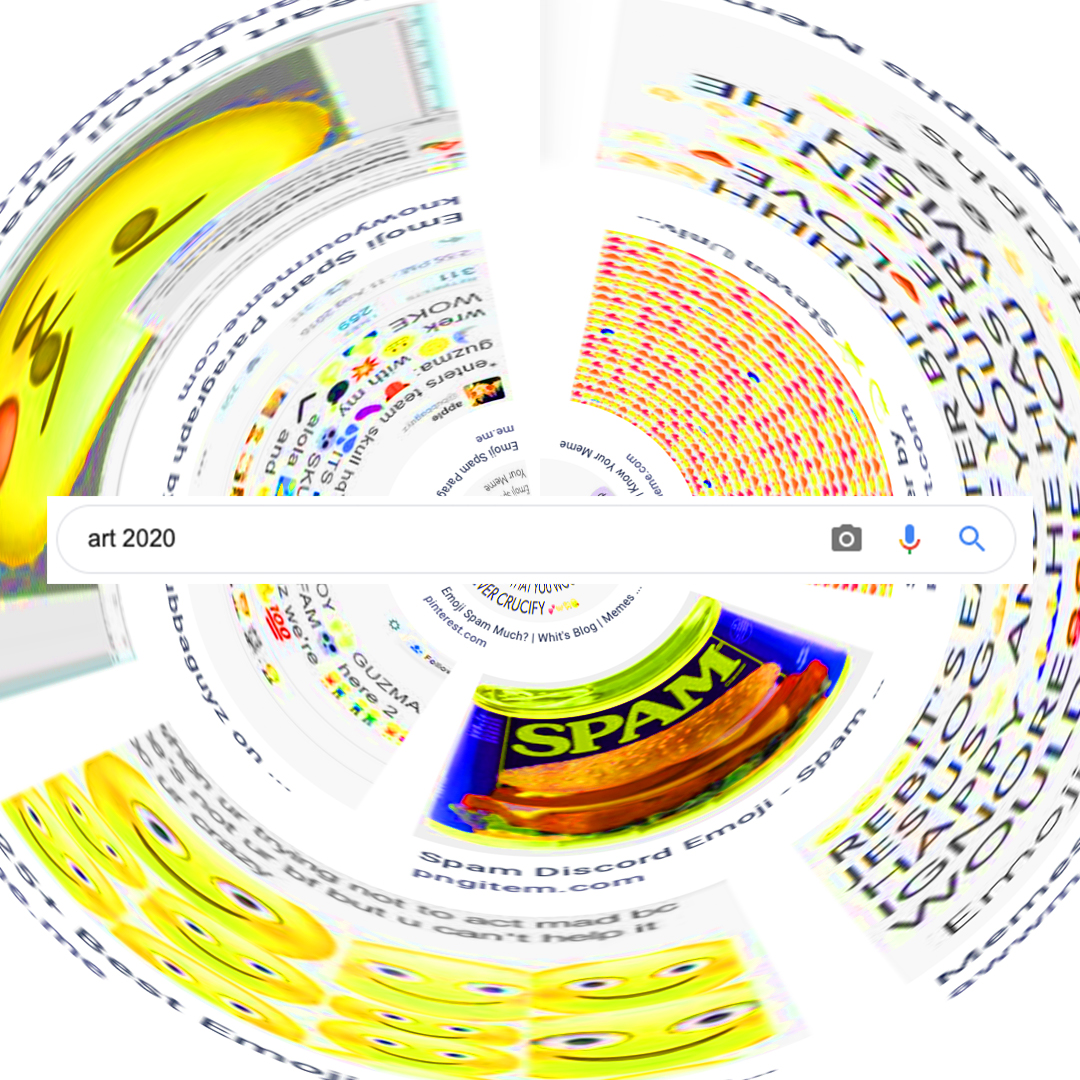 If existing media systems and networks maintain and monetize off of colonialism, exploitation, state-sanctioned violence, and follow patriarchal operation manuals, then how do practices intent on resisting these motives safely survive the virtual dimension? As we shift into a virtual economy for the sake of capitalism’s insidious mechanisms and consistency, the question remains: what are we continuing into? Possibly, this could be a desperate call for a larger overhaul within the digital age of contemporary art production and production in general. Perhaps now is a time more than ever to utilize this migration to spam the internet with messages of hope and visions of a future better served to protect the very planet we inhabit and those that aim to preserve it, populating relentlessly for aliens to one day decipher.

At this moment in time, a form of resistance is slowness, yet unpermitted for the sake of economic growth. Yet the risk of a gradual disappearance of people and range of humyn representations grows increasingly evident and image spam continues to represent this departure of the bodies that are included and those that are excluded.11So if art online begins to sift through what content continues to inundate, and that which is buried with less visibility, perhaps we can turn to a spam-like orientation in order to subvert the integration and networked self into opportunities that reek less of capitalism, and more as democratic.

Not all hope is lost in a future art world with a spam-like orientation. When we turn to digital technology for future art dissemination and integration,we may be driven to perform agency but ultimately are limited by code mandating commercial interests at the forefront.12Collectively spamming requires organization, a feat indeed widely disproportionate during a digital divide, but the affective qualities of art as spam perhaps is a remedy to a future forever online. The effortless and formulaic quality behind spam provides a curious moment of emancipation, one that continues within the dimensions of the virtual and another that continues to provide opportunities to inundate for the sake of humynity over institution.

Calling All Queers: A Spotlight on NFB Animation