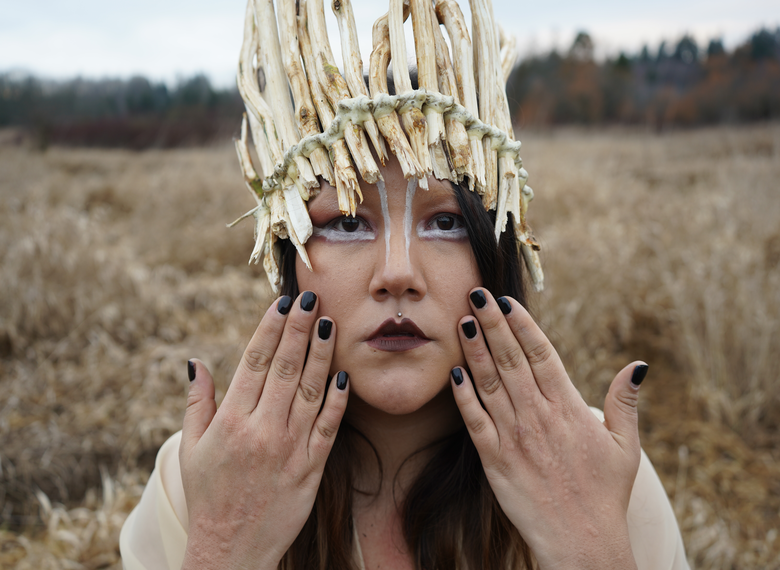 Cheyenne Rain LeGrande ᑭᒥᐊᐧᐣ stands in a field of long, yellow grass in Deer Lake, Burnaby. Her movements aren’t rehearsed. She allows her body to relate to the land instinctively. Beside her is a pile of nettle. She rubs the nettle on her arms and legs, allowing impulse to guide her actions. Though nettle may seem spiky and uninviting, it has often been used in traditional Indigenous healing practices, including for arthritis and blood flow.

She learns from her friend, Nicole Priessl, who has ancestors from and around Deer Lake: “Nicole brought me to Deer Lake prior to performing and she shared the knowledge of her Ancestors and that territory. I am forever grateful for her teachings, knowledge and the sharing of a traditional medicine. When I performed that day, I invited her to join me and together we picked the medicine I use in the performance. When performing in that space I moved with the land and felt the generosity and beauty in shared knowledge. I was surrounded by love and the healing brought by the land.”1

LeGrande is a Nehiyaw Isko artist from Bigstone Cree Nation who was living in the territory of Sḵwx̱wú7mesh (Squamish), Stó:lō and Səl̓ílwətaʔ/Selilwitulh (Tsleil-Waututh) and xʷməθkʷəy̓əm (Musqueam) Nations(so-called Vancouver)at the time. She was trying to understand how to relate to a land that wasn’t hers. Her video, titled Maskekewapoy ᒪᐢᑫᑫᐊ, meaning Medicine Water, records a performance done as part of a2019 group show called What We Bring With Us. The series, curated by Maria Margaretta, invited seven different Indigenous artists to create works about what it means to exist on territories as guests. 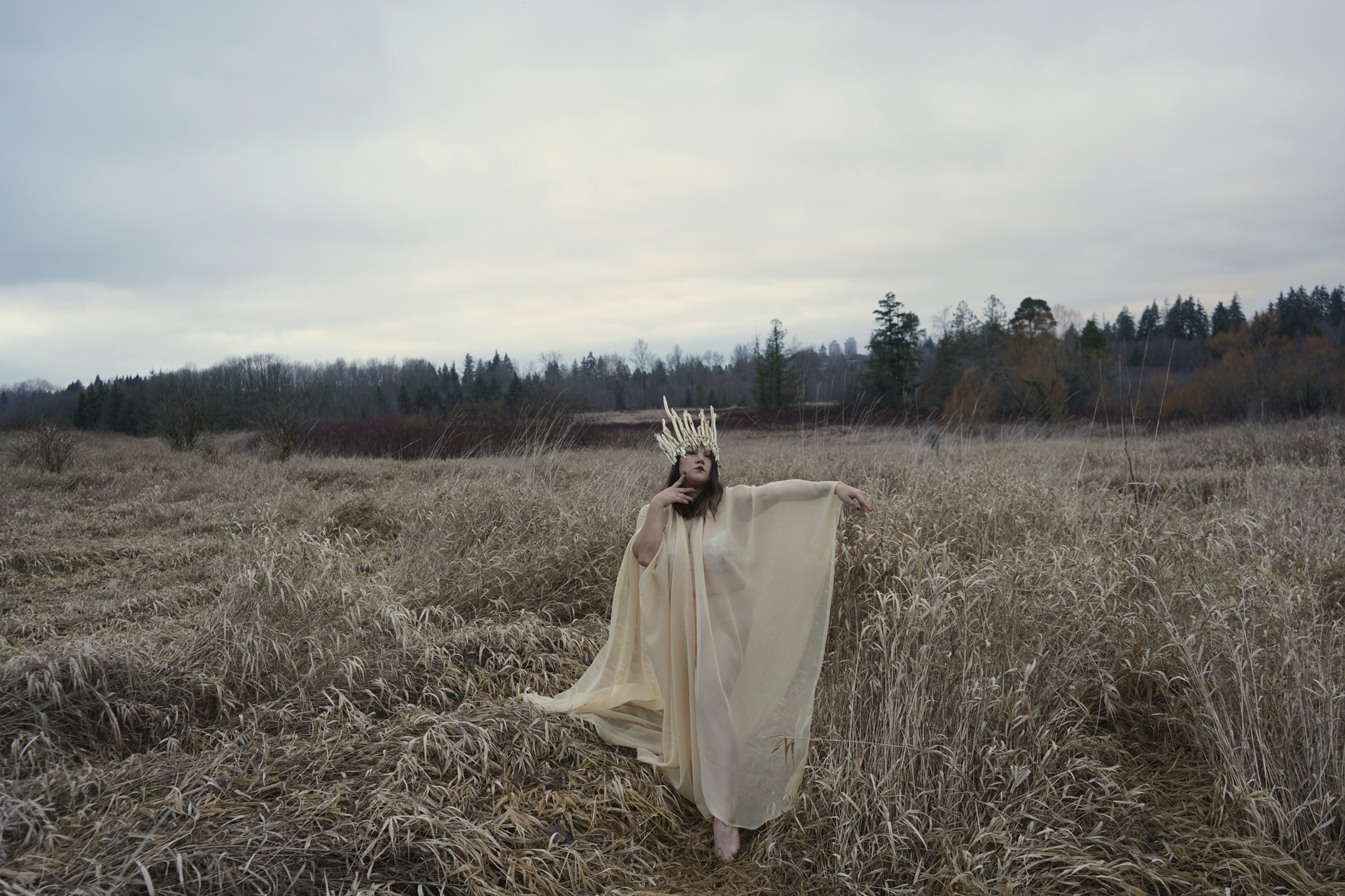 LeGrande’s performance begins with her standing in a field of tall, yellow grass. She is wearing a slightly transparent robe, and a crown of sticks. LeGrande explains these choices: “The markings on my face and the way I have presented my body is a reflection of thinking through ideas around cleansing and healing one’s body. The sheer fabric stands in as a sort of spiritual skin. A type of protection that floats in the space with me.”2

In her hands, she holds soft, green nettle. She begins to rub it up and down her arms and legs with careful, gentle motions, as though she is washing them. She maintains eye contact with the camera while she does this, and it feels like she is looking directly at me. It feels like we are learning something together about the land. As she moves around the space it begins to feel disjointed –her actions are cut off mid-movement. Her exploration is not linear, instead, it is made up of fragmented moments. She touches the tall grass around her, running her fingers through it –it’s a tactile level of understanding. Throughout this performance she uses her body, her sense of touch, to understand the land.

As she walks towards the camera, she stands directly in front, making eye contact again, and begins to gently caress her face. It seems that she is using this same sense of touch to understand herself, connecting her understanding of herself to the land. The backs of her hands and arms are covered with raw, red hives. What does it mean that her body has responded to the land in this way? There is a level of understanding that goes all the way into a physiological response –just as she understands that she is a stranger trying to make sense of a new land, her body understands this too, reacting in redness and bumps to this new and alien environment.

"This is a recurring theme throughout LeGrande’s body of work - her body is a method of discovery [...] There is something beautiful, vulnerable and tender about understanding and expressing with one’s whole self."

I think about this idea a lot. I’m Pakistani by heritage, born and raised on stolen land. I live in Alberta, knowing that Whiteness has claimed this land as its own, and thus I am twice displaced. I exist between two cultures, not Pakistani enough to feel at home there, and not White enough to blend in here. I wonder if there is a way to merge these two identities. I wonder if my body understands what my mind does, and if it feels this displacement on a physiological level.

Culture and land feel explicably tied together. Alberta’s identity is associated with its wide-open prairies. When I drive through, I often consider how I relate to these lands and how I exist in this space. The places I’ve felt at home in Alberta are few and far between. I often think back to something written by art critic Amy Fung: “The Prairies... create in me a nostalgia for a life that was never mine.”3 When I get to experience the prairies, outside of the city, I think about a life that I almost had.

Being an Albertan and being a brown-skinned person often feel impossible to combine into a single identity. There’s an idea of an old-stock, White Albertan that owns this land -a good, hard-working, honest farmer. His skin doesn’t look like mine. In contrast, I have to exist in public places with eyes in the back of my head, hackles up. I have conversations with people where I intentionally throw in the fact that I was born in Canada, as if it makes my claim to the land more legitimate. When I get a glance in public that lasts just a second too long, I prepare imaginary arguments just in case. There are very few places that exist for me without being hyper-aware of my surroundings, out of survival, out of necessity, and out of experience. I have spent so much of my life as a chameleon -shifting who I am to blend in as much as possible. It’s a terrible and deep-seated instinct to overcome. Eventually, I realized that I can find home here by establishing spaces for myself, by creating homes that are filled with the people I love, the people that keep me safe.

When LeGrande attended Emily Carr University, she lived in Skwachay's Lodge, an Indigenous artist in residence program in Vancouver. In the many connections she made there, she met a Gitsxanman who taught her about Ha ums: “The crown I wore was made from the remains of a medicine called Ha Ums. Ha Ums is a traditional tea medicine which was generously shared with me by Ya’YaHeit.”4 Together, they harvested the wood, scraped off the top layer of bark, and boiled the green inner bark under it into tea that they drank together. In this moment he imparted knowledge of that territory with her and allowed her to keep the remnants to create the crown she wears in Maskekewapoy ᒪᐢᑫᑫᐊ, a reminder of what remains of the medicine and the community she’s been a part of. 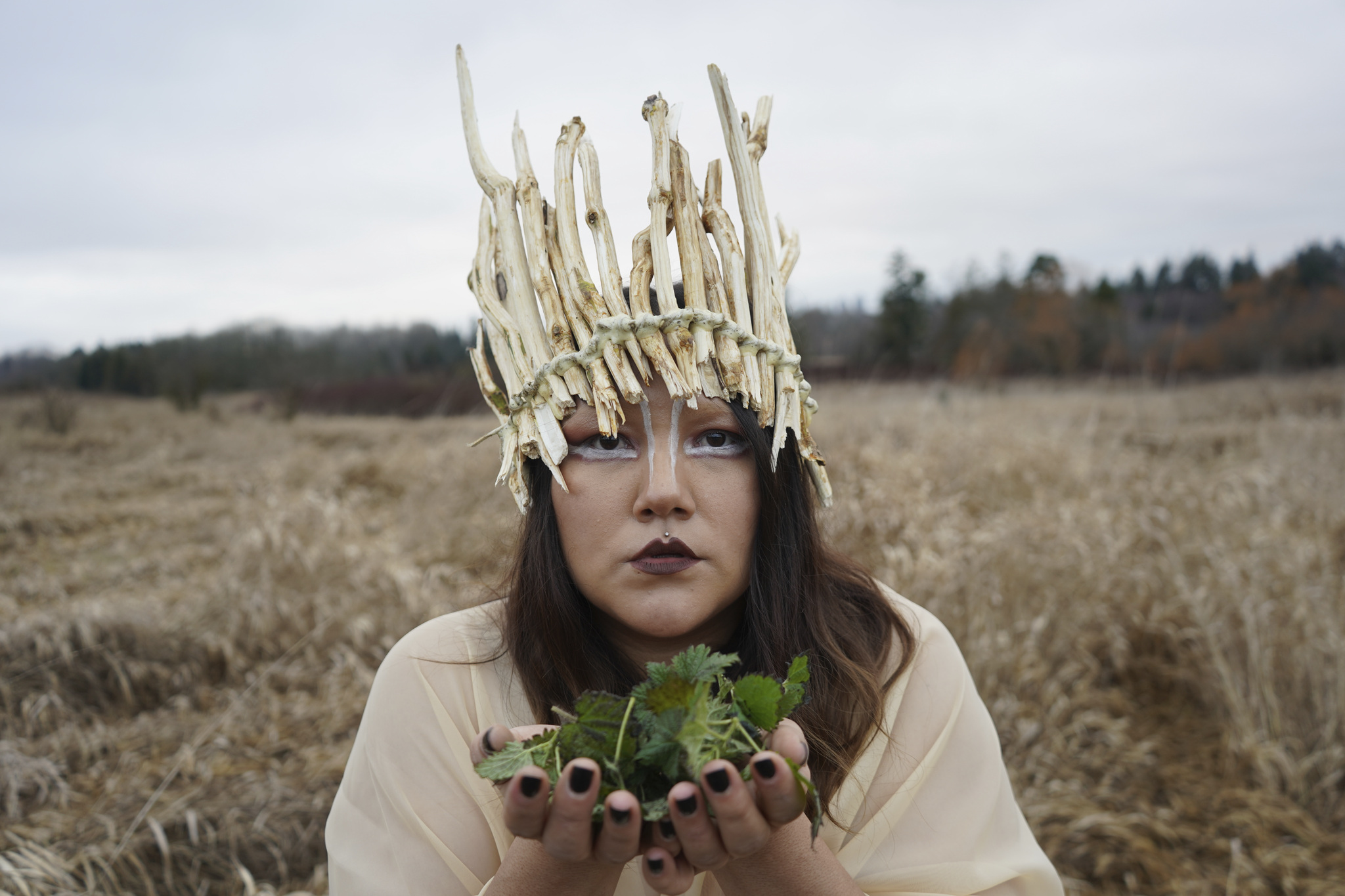 LeGrande reminds me that connection to place isn’t always inherent. When she found herself in a strange land, she reached out to those around her to build community. She shared knowledge, learned about the land, and figured out how to exist within it. Her performance is informed by the actions of her friends, peers, and mentors -their knowledge and support are with her as she moves through the land, informing her actions as she uses her body to find home there: “I often use my body in my practice as a way to speak directly to my identity as an Indigenous person. There is a point in the performance I come close to the camera and embody two things I often feel as an Indigenous person. Pain and strength. Using my own body allows me to feel, express, and to release.”5

This is a recurring theme throughout LeGrande’s body of work - her body is a method of discovery. In LeGrande’s work, Nehiyaw Isko, her body allows her to explore and understand generational trauma, and healing. There is something beautiful, vulnerable and tender about understanding and expressing with one’s whole self. This is what LeGrande does in her work, over and over again, allowing her body to lead her exploration, and to find healing.

"I exist between two cultures, not Pakistani enough to feel at home there, and not White enough to blend in here. I wonder if there is a way to merge these two identities. I wonder if my body understands what my mind does, and if it feels this displacement on a physiological level."

When I moved to Edmonton nine years ago, alone, I worked as a tutor -I found little pockets of home in the mother of one girl I tutored. She would bring us fruit every week while we worked and send me home with a home-cooked meal. I moved cities last summer, and for the first time in nine years I am living in the same city as my mom. Sometimes she brings me food when she makes something particularly delicious -sharing food is an instinct that runs deep. For a minute, when I eat her cooking, I feel like a kid again. She teaches me how to make the dishes I remember from my childhood and get a brief glimpse of home–this, too, is an exploration led by my body –it remembers what home tastes like.

I’m a guest on stolen land, and I often feel like I’m drifting with no roots. LeGrande’s work reminds me that we find connection through our families, our friends, our loved ones, and ourselves. Even when I feel alone, even when I can’t see them, my roots are there.