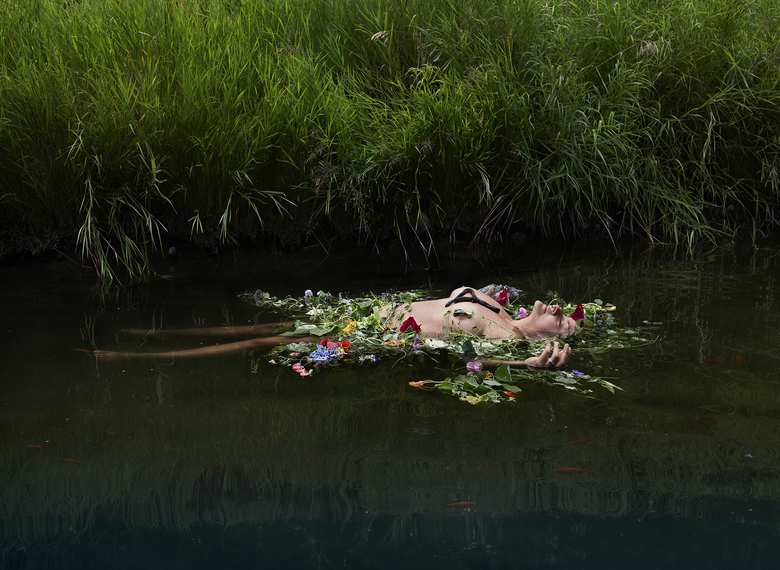 I spent my formative years in a country that celebrates the departed as one of the most festive celebrations of the year. I watched my abuela talk to the animas regularly, fixing body and heart maladies with herbs and chants. I read magic realism books by Juan Rulfo and Laura Esquivel, and regularly took part in the traditional Botoboli huecapo kateka (Song of the Deer) ceremonies of the Cahitas and Yoremes in Tehueco, Mexico. It is no wonder that my art practice became a colourful mash-up of botanical knowledge, visions, animal legends: a constant search for the magical and the mystic in everything around me.

Since I arrived in Canada 18 years ago, I have slowly let this land and its own natural knowledge and mysticism slip into my soul like drip coffee. My relationship to this new home has evolved over time, but the pandemic has solidified my connection to this place.

In early 2020, it became evident that we needed to strategize for the impending first lockdown. Secluding our kids from the pandemic noise and sparing them from anxiety seemed like the smart thing to do. We nested our family in the family farm bordering the Canadian boreal forest. Morning walks in the forest have become a routine.

I have been a guest in this land, an ancestral territory of the Syilx and Sinixt people for 17 years, but this year I became spiritually bonded to it. I still remember the first time I woke up surrounded by the vastness of the green ocean in front of me, unable to place myself or find my way back to what I knew of urban Canada. At first, I only adventured through the landscape gently, walking only by the edge of the forest service road while peeking shyly into the green mass in front of me. Growing up in the Sonora and Sinaloa deserts taught me to trust the barren and subtle monochromatic ocean of dust and waves that rise up from the hot soil, blurring the horizon.

In the Canadian forest everything is so vibrant, alive, and bushy that entering it always spooked me a little at first. In previous years, I would make sure that I followed the old railroad and only diverted from the path when being guided by a local. I yearned to meet this green spirit but the unfamiliar scared me.

"I have slowly let this land and its own natural knowledge and mysticism slip into my soul like drip coffee."

In the desert I had always felt at ease, even when I lost the path. As a kid I was a wanderer in the arid Tehueco region. I used to pay attention to the rattle snake trails in the sand and the tiny tracks left by centipedes and ants. I knew how to find sustenance in the desert, and never carried a bottle of water because I knew how to find juicy pitayas (genus Stenocereus) and tunas (Opuntia Cactaceae) to moisten my mouth. From time to time I would find refuge from the extreme heat under a mesquite bush or a sahuaro, only to find a couple of piercing eyes next to me – a horned lizard (Phrynosoma orbiculare) that was also looking for some shade. For me, those magical creatures, that resembled dinosaurs, were a welcome companion in my desert adventures. Even when I didn’t recognize the path, I knew I was in the right place and that the desert spirits would guide me safely home.

Canada proved more trying to find something familiar, something that felt safe. I was enamoured by the majestic trees and the lusciousness of this forest around me, but my guard was always up. I would swim in the ponds, half expecting to be swallowed by the dark waters that are vastly different from the translucent waters of my childhood.

The first years in the BC and Albertan forests were tentative and contrived, but over time my body remembered. I started to recognize the sweet smell of dry grass and pine resin in the hot summer, and the soft and cushy moss under my feet in the spring. It was a mother’s caress and her smell that I could recognize, not from this life, but built into my DNA, carrying the knowledge from my ancestral mothers. I could recognize it perhaps because my foremothers many centuries ago walked this land before migrating south and birthing my modern foremothers in Mexico.

The body remembers. Perhaps, in those micro-wires between my cerebellum and limbic brain there are tiny neurons that remember the smell of the soil walked by my ancestral mothers in the rainy season; knowledge passed down many generations in our DNA. I can’t prove this with the traditional ways of understanding science, but my body feels it. The smells and feelings are too familiar to be new.

"Acknowledging my co-dependence in the larger system of humanity is an act of humility, there is no ego in the collective spirit of the forest."

Immersed in this vastness of green each day, I contemplated the stars and moon each night, the memories and the dreams returned, making me feel at home. The forest would wake me up with its movement and hustle. Each day something new to recognize and see sprout; mushrooms, the wildflowers in the meadow changing from spring wild orchids into an ocean of sweet strawberries by early summer, to the purple sweet smell of huckleberries in late summer. In the fall an ocean of goldenrod and asters changing the scent of the air. With each season, with each change, I also changed. I became attuned to the whispers of the forest, hearing the tippy toe hush of white tail deer and noticing bear scratches on tree bark. I learned to recognize when sentinels were around, when I was welcome and when I was not. At night I would stand by the edge of the green ocean and listen to the trees whisper to the moon. The shooting stars in mid-summer pulsing and fading so vividly in front of me. I became so attuned to the satellite highway that I could replicate the pattern with my arms.

I wanted to take it all in. First, photographing it, later filming it constantly as fantastical creatures and visions would appear in my dreams, waking me up and urging me to go out to the dark night and stare at the stars. My nights became a mixture of childhood memories and magical visions.

I started to walk alone in the depths of the green ocean. I started to swim naked by myself in the dark pond at dusk. Eventually I would walk at night only using the crescent moonlight to give me the contours of the land.

Finding one’s connection to a place takes time; for me, 17 years to be exact. To feel safe in the dark, to walk along the trail alone with a forest costume in one hand and my tripod and camera in the other. I would feel the ancient wild woman knowledge coming home.

I began to create costumes from the materials gifted to me by the forest for my videos and photographs. My philosophy: never take, only ask. Gift always in return. Sometimes that would look like burning sage, a prayer, a gratitude song. I started performing in my costumes for the forest and its sentinels, imagining mushrooms sprouting with my songs and trees bending, allowing me to pass easily. My dreams inspired by the magic realism of Laura Esquivel’s 1989 novel Like Water for Chocolate and the 1992 film of the same name.

"It was a mother’s caress and her smell that I could recognize, not from this life, but built into my DNA, carrying the knowledge from my ancestral mothers."

As I eased into my created costumes and performances, the forest started to point its secrets to me. I would walk in a shady area by a creek only to find beautifully lit antlers covered in shiny emerald moss in front of me, nests, or animal bones. I would take those gifts and bring them home to photograph, knowing that they needed to go back to their home eventually, but I welcomed the gifts of the forest in the meantime. New magical creatures would appear as companions and guides: owls, eagles, ravens, woodpeckers, deer, and on occasion, a bear.

The forest became my teacher in a year when everything seemed so hopeless in the world. In the forest everything is interconnected, the mushroom, the deer, the tree, the creek. Each creature depends on the others to exist and thrive. All adapt to the changes in season, from dry spells to wet seasons; and yet as humans we expect wet and fertile seasons in our lives constantly. We will go against the season we are living in and will try to control it, as if by pushing a button we could make it all change. Everything takes time; relationships take time, healing takes time.

The medicine of the forest emerged so clearly. I seek for connection and support in the world around me, but most importantly, within me. Acknowledging my co-dependence in the larger system of humanity is an act of humility, there is no ego in the collective spirit of the forest. Learning to elevate the mundane into the sacred through ritual and ceremony, sometimes as simple as singing a song to a tree. Once you become attuned to a space, the place becomes sacred and performing a ceremony to enter it becomes necessary. Learning to attune to any space to make it sacred and communal is what I will take with me in to 2021. 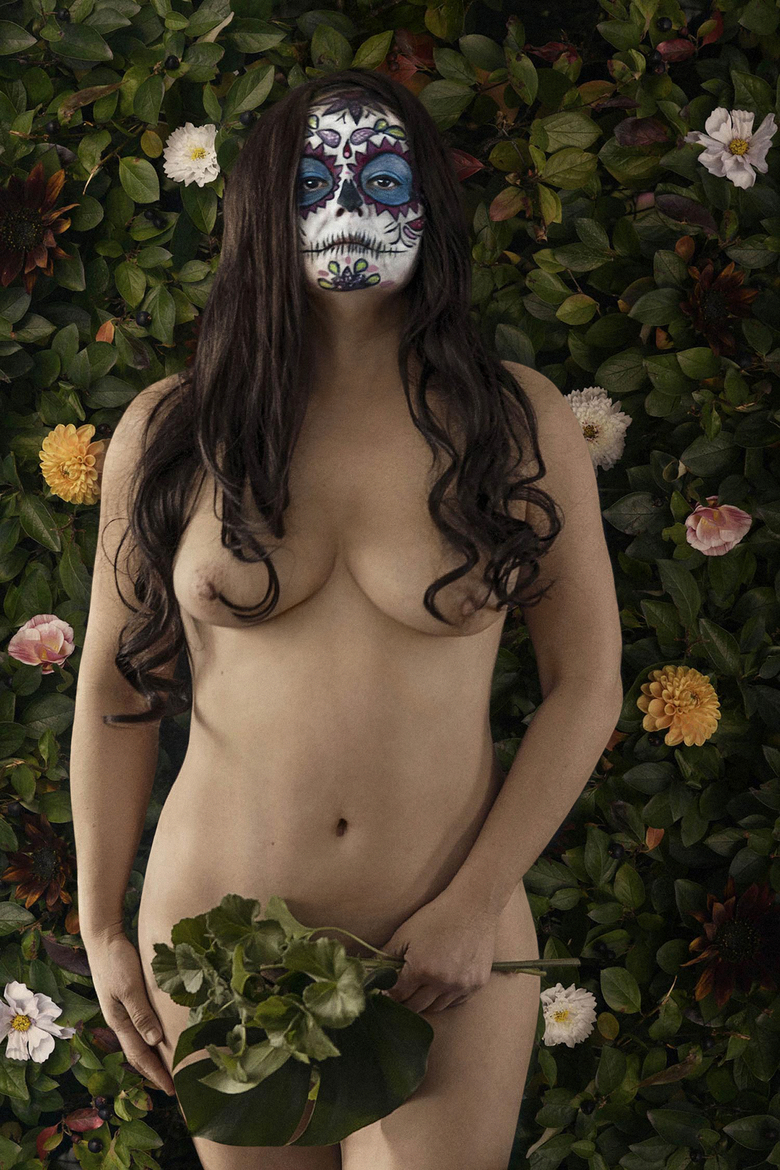 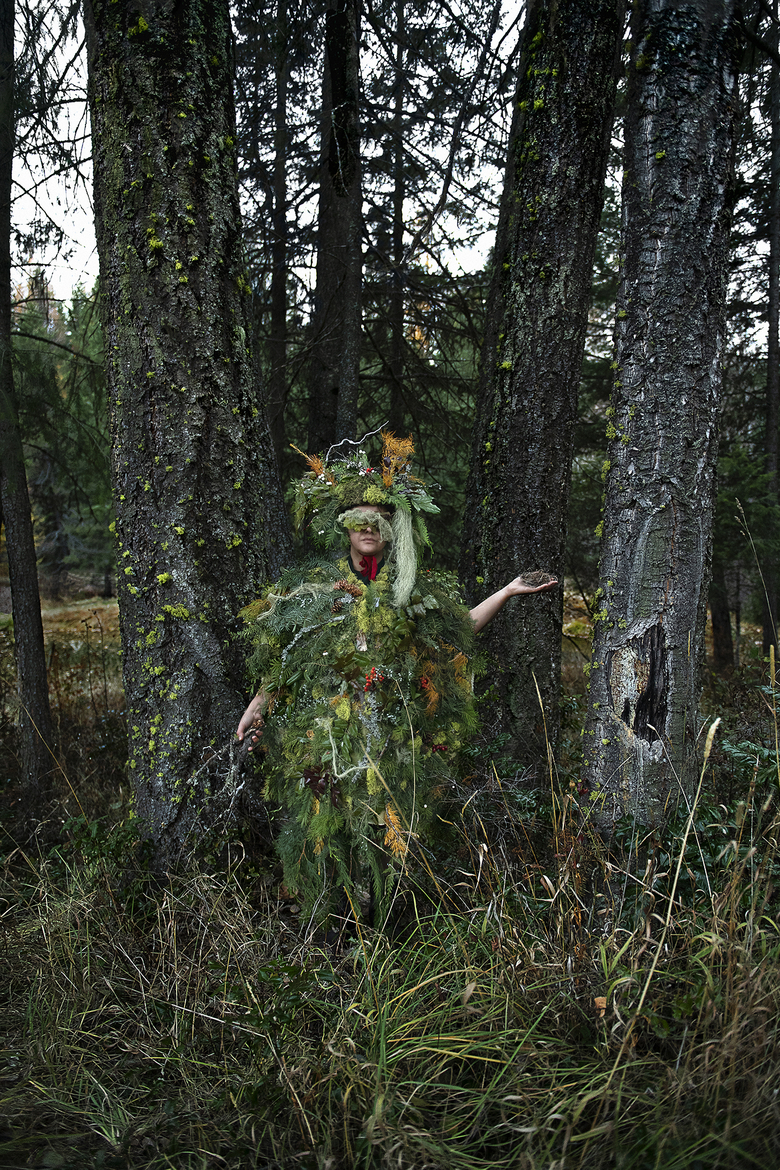 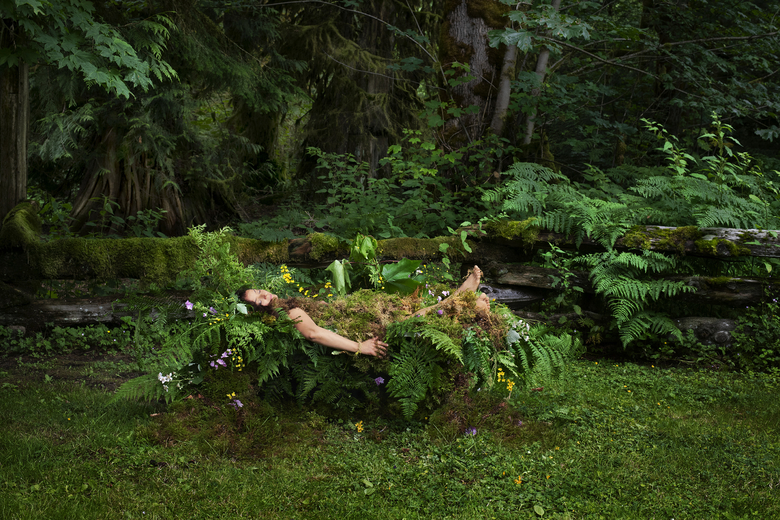 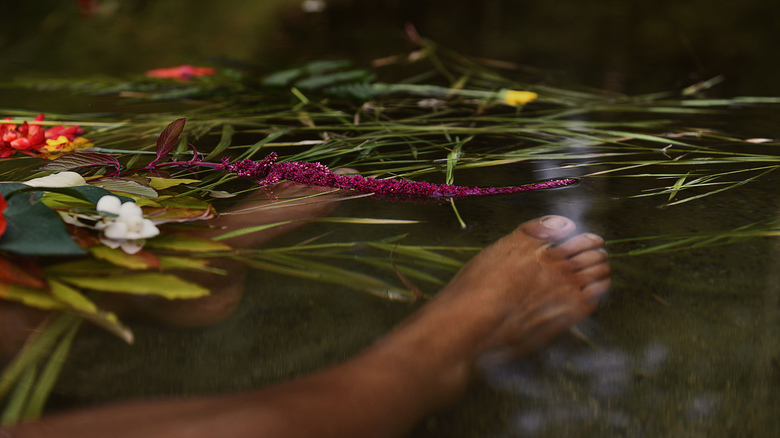 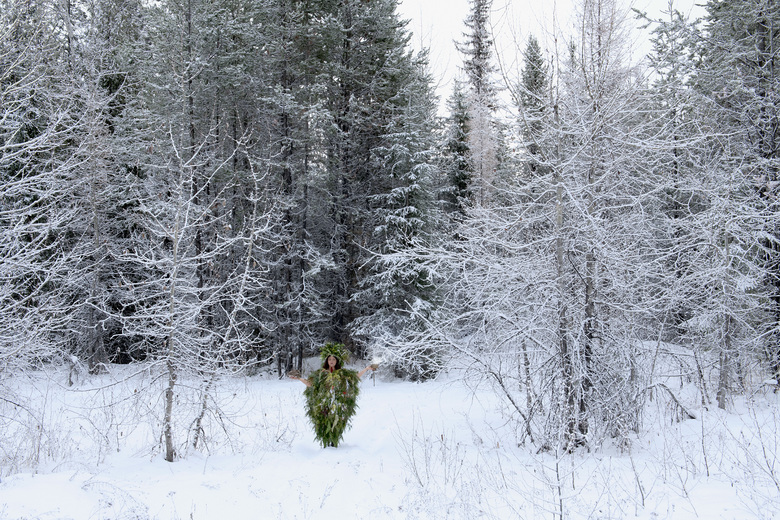 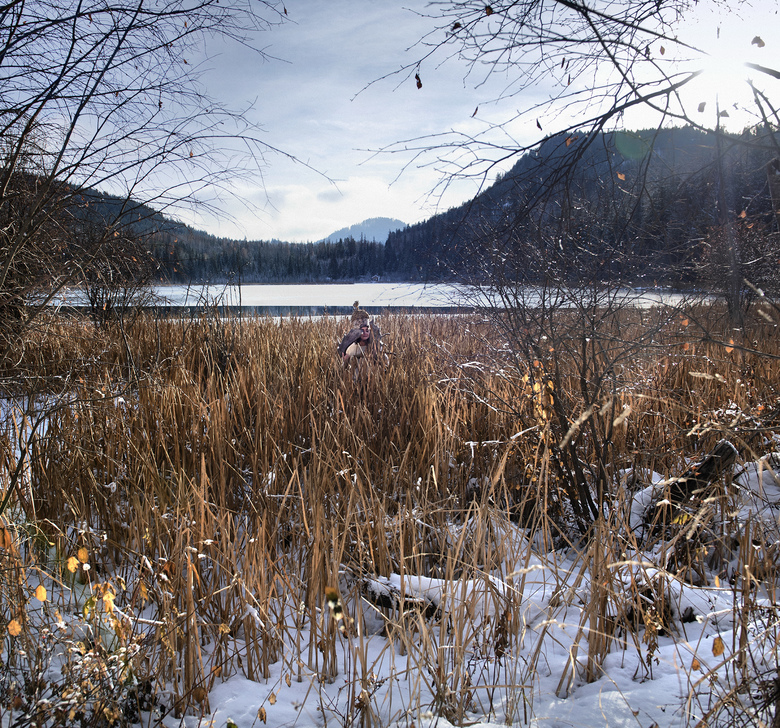 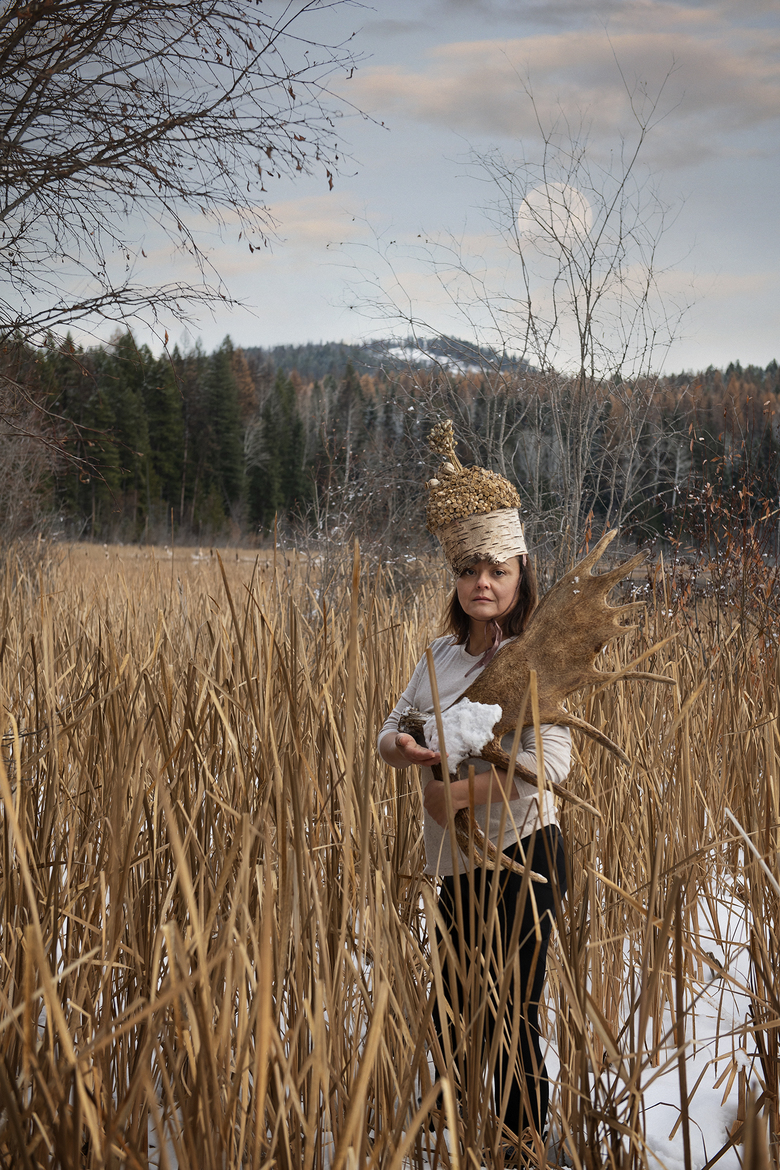 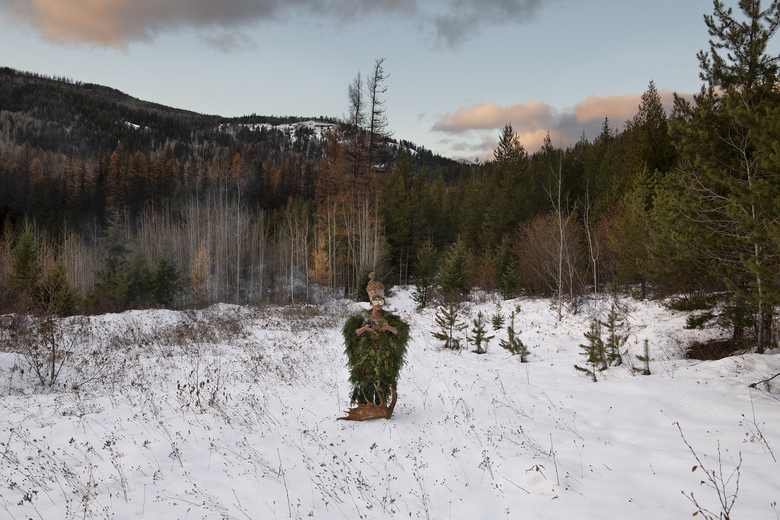 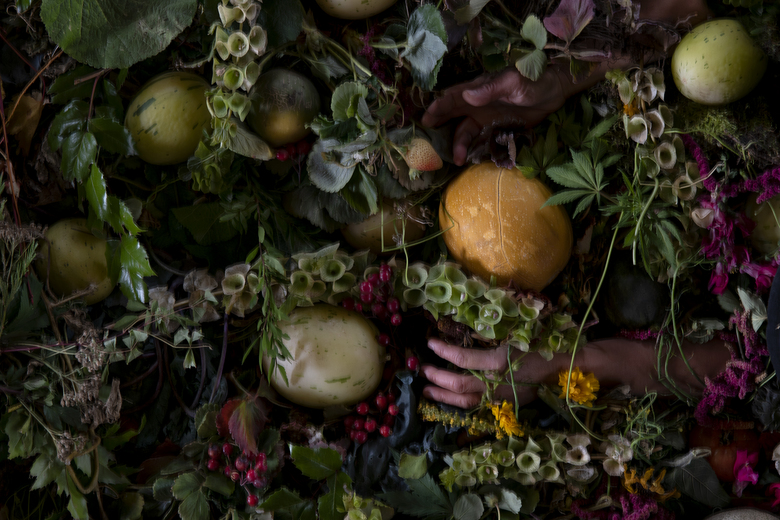 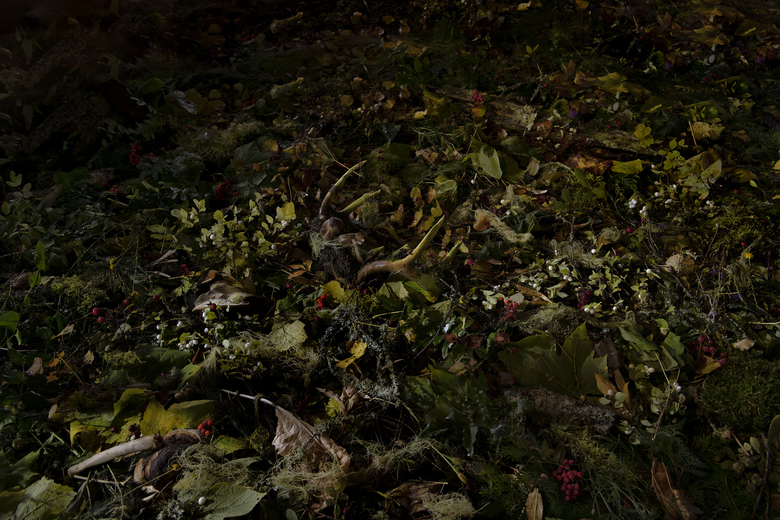 This article was written and produced in a couple of locations: Alberta and British Columbia.

As guests in these lands. Rocio Graham and the staff at Luma would like to acknowledge that these lands are the traditional and ancestral territory of many peoples, presently subject to Treaties 6, 7, and 8. Namely the Blackfoot Confederacy – Kainai, Piikani, and Siksika – the Cree, Dene, Saulteaux, Nakota Sioux, Stoney Nakoda, and the Tsuu T'ina Nation, and the Métis People of Alberta. As well in the Kootenays of BC, this is the traditional and ancestral territory of the Okanagan Nation, the Syilx, and Sinixt people.